Enter stage left: curtain to rise on original theater production in Tusayan
Grand Canyon Dinner Theater and Steakhouse to open in early May 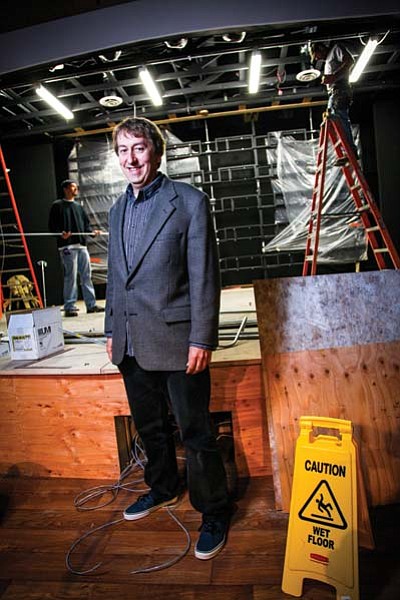 Ryan Williams/WGCN<br> Doug Hallenbeck takes a break from pre-production work as construction continues on the Grand Canyon Dinner Theatre and Steakhouse in Tusayan.

TUSAYAN, Ariz. - When it comes to original, cutting edge theater productions, most people likely think of New York's Broadway and off-Broadway offerings. But, visitors to the Grand Canyon are in for a surprise when they walk through the doors of Tusayan's new Grand Canyon Dinner Theatre & Steakhouse.

Formerly the Western Discovery Museum, located off Highway 64, the building is undergoing a radical transformation and will emerge as an old west themed dining and entertainment establishment.

The steakhouse will feature an antique back bar along with wainscoting, punched ceilings and an old potbelly stove among other period décor.

Writer, director, and vocal arranger Doug Hallenbeck said one of the more interesting aspects of the production is the integration of a large video wall at the rear of the stage.

"It's one giant screen," Hallenbeck said. "In a lot of concert venues or Vegas Cirque venues they use a video wall. But, to actually us it in a theater piece, I've never seen it done, actually. It's a little cutting edge."

Hallenbeck said the show opens at a train station. The screen will display a photo of the station to help set the scene with the stage becoming the railway platform.

During musical numbers the screen will come to life much like a music video.

"We go into a more imaginative place, what's in the character's mind," Hallenbeck said.

How did Hallenbeck, based in the Los Angeles area, end up in Tusayan working on a theater piece?

"It's not the easiest thing to get original stuff produced," Hallenbeck said. "So, to have the opportunity to write something is great."

A writer, director, and vocal arranger, Hallenbeck won the 2011 Magellan Award for Best Entertainment on the High Seas for his vocal direction and arrangements for CANTARE on Holland America's MS New Amsterdam. He brings an extensive theatrical background to the Grand Canyon musical.

Creating a historically accurate yet entertaining production has been a challenge according to Hallenbeck but ultimately very rewarding.

"How am I going to take Harvey Girls and other western elements, how can we bring some of these elements in? How can you research this area and incorporate it? It was a challenge to weave in history without going to a documentary feel. And, finding a way to keep it interesting and dramatic with comedy."

As it turns out, Hallenbeck was up to the task. The show, set in the early 1900s, begins with an encounter on the Grand Canyon Railway platform between Miss Kitty, a young girl from Philadelphia who has come to the wild west to work as a Harvey Girl waitress, and a diverse cast of characters, including the devious Captain Ogilvy, the 'shady lady' Madame de Murska, a happy-go-lucky prospector, Cockeyed Frank Carson, who mistakes Miss Kitty for his mail order bride and a handsome young cowboy, Shane Guthrie, who rides to her rescue.

Elling Halvorson, the Dinner Theatre's owner, said he hopes to bring a world-class entertainment experience to the Grand Canyon.

"It only makes sense to combine the great heritage of hospitality and the mystique of the old west," he said. "The Harvey Girls, the Grand Canyon Railway, the rough and tumble wild west, and the amazing beauty of this entire region are rolled into one grand experience for our visitors."

"The music is definitely from the era, so we went back into that era and found some great stuff," he said. "(Music Director Edward Harris Roth) updated it. Even though a song may have been written in 1900, it has a more up beat arrangement with some country elements, some western elements, some of them are a little more jazz and there is definitely some blues.

Roth has toured with Grammy winners Coolio and Mya, and has played keyboards on recordings including Will Smith, Sophie B. Hawkins and Angie Stone.

The show's choreographer, Laura Nickerson, has worked with Kelly Monaco on "Port Charles," on the stage musicals "Cats," "Mamma Mia," "You're a Good Man Charlie Brown" and "Once on this Island," the television pilot "Celebration Station."

Along with the theater experience, the Grand Canyon Dinner Theatre lives up to its name serving a family-style dinner during the show delivered to every table featuring flame-seared steaks, chops, poultry, and fish specials as well as vegetarian options. The wait staff will also wear period costumes, with the waitresses donning vintage Harvey Girl-style uniforms.

The Dinner Theatre is lined with building facades reminiscent of an old west town, accented by wagon wheel chandeliers. The playroom has been built to create the look and feel of an 1890s gaslight theatre, complete with red velvet draperies and lamp posts much like those that stood originally on the streets of Tombstone in the early 1900s.

The dinner video pre-show is projected on two huge video screens and features a look at life in the west, both past and present.