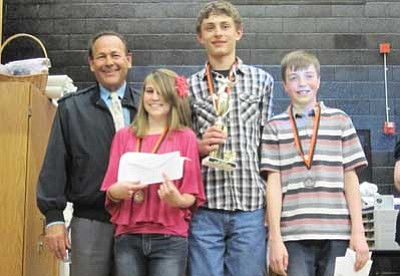 The Knowledge Bowls are part of WEMS on-going effort to "raise the bar" academically and to challenge the top students in the eighth grade each year. Students compete in a game-show question and answer period in the two subject areas.

The social studies event included two sessions. In the first session, the students were quizzed on topics related to the U.S. Constitution and U.S. history of the late 18th Century. In the second session, students were questioned on their knowledge of current world affairs.

The math event also included two sessions in which students were asked math vocabulary and asked to calculate problems before answering.

The first place winners in each Bowl were awarded $50, a trophy and a gold medallion. Second place winners received $30 and a silver medal while the student who placed third received $20 and a bronze medal.

In the social studies competition, first place went to Andrew Karlsberger, second to Braden Heap, and the third place prize went to Katie Ellico. This competition ended in a tie-breaker for first and second place.

In the math Knowledge Bowl, Andrea Hernandez took the gold while Katie Ellico and Braden Heap took the silver and bronze respectively.

The two events were sponsored by Mrs. Karen Macks in math and Mr. John Lechtenberger in social studies. Williams PTA and the Williams Site-based provided the money for the prizes and for the refreshments.Mr. Gary Berger made the donation to cover the cost for the trophies and medallions.

Williams Middle School is committed to stimulating academic interest for the most talented students in the school. This event is one of the many ways that the school rewards those children who put forth the extra effort to succeed beyond the regular curriculum.