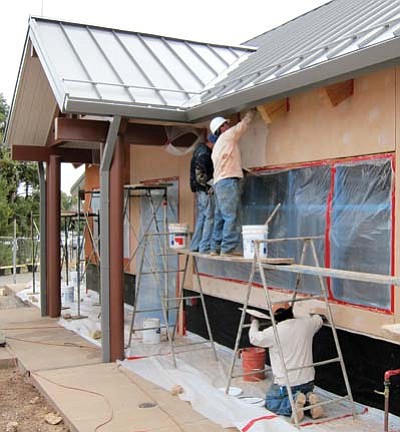 Photo/NPS<br> Construction of a new bike rental and food service facility near the Visitor’s Center and Mather Point will wrap up in May.

This concessions contract will be issued for a term of 10 years and requires seasonal bicycle rentals, as well as guided daily bicycle tours conducted during the spring, summer and fall. The contract also requires year-round, "grab and go" food and beverage service targeted toward hikers, bikers and pedestrians in the Mather Point area of the park. Operations under this new contract are expected to begin in mid to late May.

Visitors utilizing the bicycle rental service will be able to ride on portions of the park's multi-use greenway trail system open to bicycles, on all park roads open to public vehicular traffic and on park roads open only to shuttle bus traffic, including the Hermit Road and the Yaki Point Road. Visitors can also make use of the park's shuttle bus system, which can accommodate up to three bicycles per bus.

"The addition of 'grab and go' food service and bike rental in the Mather Point area will improve South Rim visitor's ability to experience the park without their personal vehicle and to explore Grand Canyon's miles of scenic trails and greenways," Uberuaga said.

Bright Angel Bicycles will operate from a new 1,200 square foot bicycle rental/snack shop facility located in the Grand Canyon Visitor Center complex. The building is expected to be completed by May 1. Its design and materials are compatible with the other buildings in the complex and include a metal roof, stucco and stone masonry siding, with two covered patios on each end of the building for bicycle fitting and orientation, and outdoor cafe seating.

The addition of visitor bicycle rental operation and the construction of the facility on Grand Canyon's South Rim was envisioned by the park's 1995 General Management Plan and was included as part of the park's 2008 South Rim Visitor Transportation Plan. The NPS prepared an Environmental Assessment for the South Rim Visitor Transportation Plan and a Finding of No Significant Impact was signed May 27, 2008. For more information on the plan please visit http://www.nps.gov/grca/parkmgmt/trans.htm.