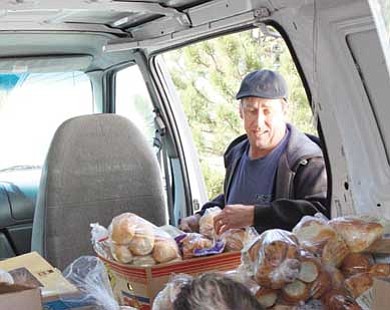 According to the Association of Arizona Food Banks (AAFB), one in three Arizonans - out of our six million-plus population - is considered working poor: they live at or below 185 percent of the Federal Poverty Level, earning $40,800 or less for a family of four. AAFB estimates as many as 17 percent - or 375,687,507 actual meals - are missing from the diets of working poor Arizonans.

Locally, the Williams Food Bank serves an average of 150 families each month when doors are open two Fridays. The local food bank - spearheaded by Guy and Angie Mikkelsen - has distributed 1,500,000 pounds of food since 2004.

Guy and Angie have already started gathering food for Thanksgiving and Christmas food boxes. Last Thanksgiving, 300 turkey boxes consisting of 50 items each were distributed to those that would not have enjoyed a holiday dinner. Guy expects even more boxes will be necessary this year. Suggested donations for holiday boxes include chicken broth, gravy, instant potatoes and stuffing mix, green beans, cream of mushroom soup, canned yams, marshmallows, cranberry sauce and dessert mixes.

All holiday boxes contain high-quality, 14-pound Norbest turkeys purchased at wholesale prices through Shamrock Foods. By donating $10, you will purchase one turkey. Guy and Angie are working with local businesses to serve as drop off locations prior to the holidays. Once established, designated drop off businesses will be listed in the News.