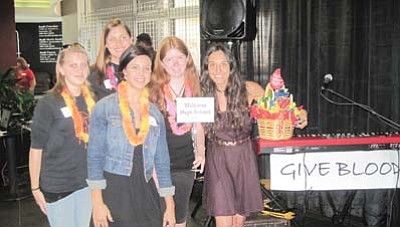 WILLIAMS - When it comes to generating a high turnout for their quarterly blood drive, Williams High School (WHS) have the "red" stuff.

To compete in the statewide challenge, WHS has a quota of blood donors they need to recruit for the four yearly blood drives they host.

Their goal number equals the total number of WHS seniors. So, in four blood drives, WHS must produce a minimum of 48 donors, which they surpassed by 125 percent even before classes started.

"Our goal numbers set by UBS haven't changed that much, still about 48," Fleishman said. "The last drive we had 127 donors. The one before that we have 115. This summer we had about 67."

Not to mention approximately 50 people they were forced to turn away during the last drive due to lack of supplies.

Procuring close to 400 pints of blood this year, WHS is already looking forward to the next drive. The goal next year is to win both categories of competition - most total donors and highest percentage participation. Fleishman is confident they can pull it off.

"If the community actually participates in the blood drive like they used to back in the sixties when the Red Cross was here, we could do this," Fleishman said.

But at the end of the day, the incentive to win a Diamondbacks game in a party suite isn't the reason WHS participates so heavily in United Blood Service's High School Challenge. Putting faces to the numbers is what matters most to these students.

WHS Senior Paige Parenteau represents one of those faces.

Earlier this summer, when Parenteau was competing in a rodeo in Oklahoma, she fell off her horse during a barrel race, hitting a fence and rupturing one of her kidneys. Ultimately, it had to be removed.

"I had to have three pints of blood, the doctors told me that if I had not gotten those, I would have died," she said.

When Parenteau asks people to donate blood, she tells them, 'yeah, it's scary at first but you have to think about how you are going to impact peoples lives.'

And that someone may be closer than you think.

The next blood drive will be held Oct 3-4 in the Williams High School Gym.