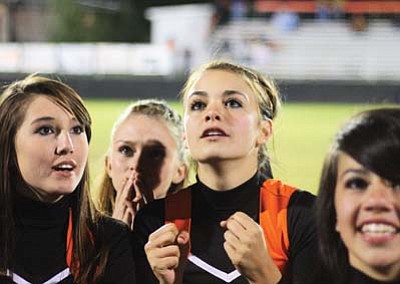 WILLIAMS - Viking spirit will be on show next week as students at Williams High School celebrate homecoming with an action-packed schedule of events, which includes including a parade, bonfire and homecoming games against Page and Grand Canyon.

Students are gearing up to compete all week long to determine which class, freshman, sophomore, junior or senior, has the most Viking spirit.

On Sept. 28, activities will begin at 8:30 a.m. with game one of the ever-popular powder puff girls' football tournament. Other competitive events include a water balloon toss, pyramid building, tug-o-war, boys' volleyball tourney and pie-eating contest.

The homecoming parade down Route 66 begins at 1 p.m.

"They can build things but nothing goes on the floats until Monday," Fleishman said.

United Blood Service will also be taking part in the parade and at the homecoming games, giving the community an opportunity to sign up to donate blood.

"Dark-thirty is when the bonfire takes place," Fleishman said. "Somewhere in the neighborhood of 7:30 p.m. The kids start showing up at 7 p.m."

On Friday, The Lady Vikings volleyball team will take on Grand Canyon starting at 4 p.m. and the Vikings football homecoming game against Page begins at 7 p.m. The coronation and crowning of homecoming royalty takes place at half time.

The homecoming dance, which is open to the public, begins in the gym immediately after the game and runs until midnight. Eddie Miller from 93.9 The Mountain will DJ the event.

"If the Class of '73 wants to come to come to the dance they can, but they may find the music foreign to their ears and the dance moves changed slightly," Fleishman said.

Fleishman is in the process of asking local merchants to participate in the festivities.

"Back in the day, merchants used to give specials on Homecoming Day, be it meals drinks whatever," he said. "We would very much appreciate merchants, since the students are going to be in town, offer a special to bring the community in."

Senior Amanda Wamble said it is incredibly important that the Williams community come out to support WHS teams.

"It really helps the football and volleyball players say, 'oh my gosh, I really have to win this game because look how many people are here,'" Wamble said.