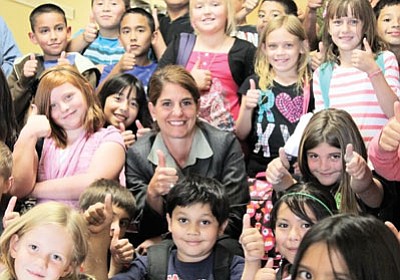 WILLIAMS - Williams Elementary-Middle School moved up a notch this year to the Performing Plus designation under Arizona's public K-12 education accountability system.

WEMS Principal Rachel Savage said the higher ranking is the result of a lot of hard work.

"Which I think is a huge deal," Savage said. "I am so proud. And of course you have to give all the kudos to all the teachers, the parents and the students."

Savage said she believes recently implemented math and reading curriculums have been a contributing factor along with a number of intervention programs. Title 1 federal funding has helped to offset the cost of the programs.

While WEMS moved up a rank at the state level, progress stalled on the federal Adequate Yearly Progress (AYP) ranking system.

"We have to recognize that work still needs to be done in the areas of reading and math," Savage said. "We did stuggle in some areas. We celebrate our achievement while remaining focused on the areas still in great need of improvement. The district is currently analyzing the data and setting goals for future improvement and successes."

Just as WEMS has attained the Performing Plus designation, Arizona is changing the method by which schools will be ranked in the future. This year and next year will be transition years. All schools in Arizona will receive labels from both systems during that time period due to the substantial differences between the two school evaluation methods.

The system will rank schools with a letter system familiar to anyone who ever spent time in a classroom as a student or teacher - A through F. It's not just a new label. The formula for ranking schools throughout the state is changing as well.

The new system, a result of SB 1286, 2010 Arizona State legislation, mandates school rank should take into consideration student progress as well as proficiency.

"You have to show growth," Savage said.

While WEMS is now a Performing Plus school it only received a "C" rank in the new system.

Williams Unified School District Superintendent Steve Hudgens said regardless of how the state chooses to rank the district's schools, the success of the students remains the number one priority.

"What the community needs to understand is the administration and teaching staff in the district is working hard to maintain a sound educational system for the kids in the school," he said. "It's important no matter how you get labelled, that you're doing all you can do to make things happen in a positive mode for our students. And, that's what we're doing."