Rock and roll high school
Grand Canyon School students throw down their pencils and pick up guitars (and tambourines, horns and drumsticks) during fifth annual School of Rock 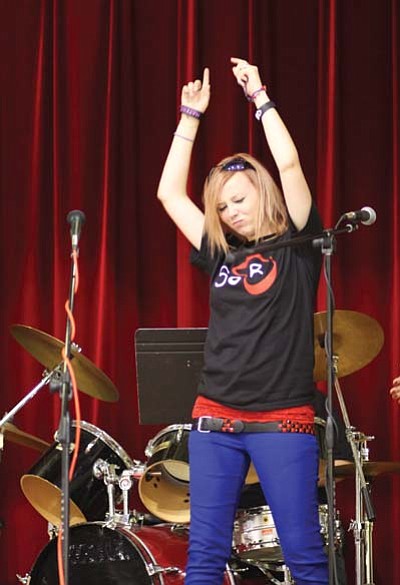 GRAND CANYON, Ariz. - Grand Canyon School music students performed two public concerts last week playing rock and roll from the past as well as some more recent hits. Here's the catch. They only had three days to learn and rehearse the songs before hitting the stage.

The students began learning the songs on Monday while taking part in the Grand Canyon School of Rock (SOR) weeklong program offered as part of the Grand Canyon Music Festival. The program, now in its fifth year, gives students the opportunity to study with world-class musicians and perform in public unveiling some of their new musical knowledge.

Jaymie Petzold, a four-year veteran of the SOR program, plays guitar and stepped up to the microphone for lead vocal duties last week. He said SOR helps get students used to performing in public and teaches them how to get a set together quickly.

This year, the students worked under the tutelage of violinist Joe Deninzon and guitarist Steve Benson. The two helped the students pull together six rock and roll tunes including Wild Thing, Day Tripper and Forget You before the band hit the stage last Thursday to perform a special concert at Grand Canyon School. The School of Rock group hit the stage the next night at the Shrine of Ages, performing a community concert prior to the Catalyst String Quartet's performance.

According to Rene Westbrook, the program's organizer, Deninzon and Joe Millitari originally approached her asking if a music outreach program might be a possibility as part of the festival.

"So now, five years later, they do all the artistic direction and I do all the production work," Westbrook said.

Westbrook said the SOR program has been a hit with the students. Once they get the opportunity to learn from some of the best musicians around, they keep coming back for more.

"We have some kids that are really fine musicians and it's kind of their favorite thing to do every year," Westbrook said. "If we pull in a kid during their freshman year, they're here all four years."

Ricardo McCreary, playing guitar in the SOR band, said working on his guitar skills during the course of the week with professional musicians is the best part of the experience.

"Overall, I think it was a fun process," he said. "The group is great. It's good to work with other musicians, learn new songs and play for a crowd."

Lauren Eldridge said taking on the front person role in a rock band is a little nerve racking.

"It's kind of scary but its kind of fun," she said, adding Deninzon and Benson make the experience feel fun and casual and not so overwhelming.

The SOR band was still getting some of the kinks out of their arrangements one hour prior to their Thursday afternoon performance at Grand Canyon School. Deninzon and Benson, along with harmonica player Robert Bonfiglio quickly ran the band through the six-song set, having the kids replay problem sections.

When the students kicked into concert opener Wild Thing in front of a packed auditorium, the band pulled it all together, playing the rock and roll classic with newfound authority.

Benson looked on with satisfaction and a smile.

"The Troggs would be proud," he said.