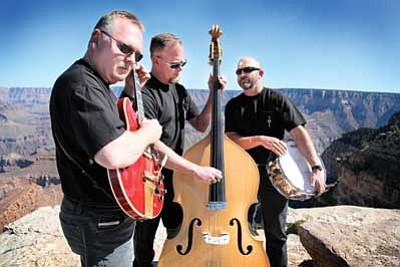 Ryan Williams/WGCN<br> From left, Emmons Berry, John Vail and Bryan Stone of Exit 64 run down some Las Vegas era Elvis in preparation for the casino night portion of Rock-tober Fest this Friday.

TUSAYAN, Ariz. - Like beer? Looking for an upscale meal this weekend? Then you're in luck. Three of the areas top chefs have joined forces to create a gourmet tasting menu pairing their food with the beers of Grand Canyon Brewery.

And that's not all. Along with the food and beer pairing, the Rock-tober Fest event this Friday sponsored by the Grand Canyon Chamber of Commerce and Visitors Bureau in partnership with the Grand Canyon Brewery will feature music by Exit 64 and a casino night.

Greene said the three plan to incorporate flavors from Grand Canyon Brewery's beers into the food they prepare for the pairings.

"What we're doing is incorporating our knowledge of food with their flavors and passion for beer," Greene said.

There will be four main courses with two palate-cleansing courses in between.

"What we're doing is incorporating our knowledge of food with their flavors and passion for beer," Greene said.

The soup and appetizer course from McTigue will pair American Pilsner with a Pumpkin Porter chipotle soup along with a mixed green salad with pilsner vinaigrette.

All three chefs will prepare an entrée to be paired with GC Brewery's Oatmeal Stout. Greene will present a Raspberry Pilsner infused buffalo slider with artesian lettuce, roasted garlic and grilled red onion on a beer bun. Fuerfanger said he plans to prepare duck confit wrapped in a crispy shell with an Amber ale sauce.

"There will be three entrees on one plate, just smaller portions," Greene said.

The palate cleansers will consist of a mango and prickly pear sorbets with gelatinized beer froth.

When it comes to pairing food with the Grand Canyon Brewery's beer offerings, Fuerfanger said he anticipates a sensory success.

"You know what the beer tastes like. It's really good," he said. "A lot of things match, some things don't. This will be a very good match."

"I think the hardest part we're going to have is finding that one beer to sit down to drink with everything," Greene said. "That's where our challenge lies. Literally, putting the one beer that we want to match with the many beers that were already infused into the food."

The casino night portion of the event will feature entertainment provided by Exit 64. Since 2001, the band has entertained locals and visitors alike with their toe-tapping tunes. The group is comprised of lead singer and guitarist Emmons Berry, bassist John Vail, and drummer Bryan Stone. Vail and Berry are original band members and Stone has been with the group for about two years.

Exit 64 is known to turn up their amps to 11 for a variety of causes, having played concerts to benefit the Kaibab Learning Center, Rotary and community members with cancer, to name just a few.

The group played their first gig as a benefit for the families of 9/11 victims and has been going strong ever since, traveling as far away as Needles, Calif. to play. The Rock-tober Fest marks the band's 10-year anniversary.

Vail said the trio is currently adding new songs to their varied, but always danceable, playlist.

"We've been pulling together some Vegas tunes for the casino night," Vail said. "We just like playing good, upbeat, fun music that everyone can dance to."

The casino opens at 7 p.m. and will include roulette, craps, blackjack and Texas Hold'em with a $50 buy in for poker chips. Those wishing to play roulette and craps will receive $25 in "funny money" to get started.

Those not taking part in the pairing won't miss out on tasting Grand Canyon Brewery's beer. Beers that are chosen for the pairing will be poured throughout the casino night as well.