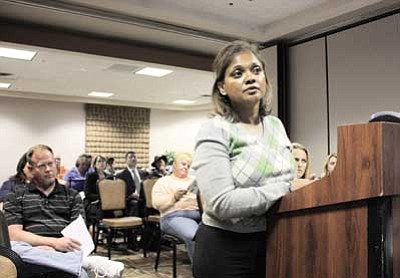 TUSAYAN, Ariz. - After nearly five hours of public comment, presentations and discussion, the Tusayan Planning and Zoning Commission chose to hold their vote on Stilo Group's development plan during the Oct. 17 meeting, opting to continue the meeting Oct. 24.

They agreed the extra week would allow them time to digest the information and be clear on specific issues brought up during the meeting.

The proposed annexation of Ten-X Ranch and rezoning of Kotzin Ranch and Camper Village raised an overall negative response from the public. There were concerns regarding water source, environmental impacts, destruction of potential archeological sites, population increase, along with specific language definitions in the agreement.

Representing the Havasupai Tribe, attorney Jay Weiner told the commission they were very concerned about the "hasty and uncooperative approach" the town was taking. He said the tribe was not consulted until recently, and have not had the opportunity to review the development agreement, which was presented by the town planner Mark Reddie at the opening of the meeting.

A major concern to the Havasupai Tribe is where the town will obtain water for the development. The tribe, under federal and state law, has extensive water rights in the ground water beneath Tusayan and beneath the Coconino Plateau.

"The water is the lifeblood and the economic backbone of the people. The water rights are senior to anything that the town of Tusayan and this development might have," Wiener said. "As it stands, there is nothing in the documents that have been presented to the public that make any sort of rational, reasonable, scientifically-based plans for when and how water for this massively proposed expansion for the town of Tusayan might be sourced."

Rose Law Group Attorney Carolyn Oberholtzer, representing Red Feather Properties, guided the commission through a series of PowerPoint presentations during the public hearing portion of the meeting. She claimed the development plan failed on a number of points.

After her points were made, town attorney Bill Sims said if the commission wants to approve the plan, they will to approve it with all the stipulations the town staff has already put in place.

Oberholzer's issues with the plan sparked the revision of the definition of "occupancy and hotel," to require as a stipulation the update of the citizen participation report as a result of recently received information, which is the responsibility of the Stilo Group.

She also said there needs to be a maximum percentage of park models on a proposed lot at Ten-X Ranch with a certain degree of separation. Town staff will meet with Stilo to determine the percentage.

Before the next P&Z meeting, town staff will also amend the development agreement requiring the reversion of Camper Village, add the definition of water supply and to have Stilo meet with the Grand Canyon School District and work out a donation agreement.

The terms "entertainment and leisure" also need to be clarified into a more specific definition.

Because much of the public comment stemmed from concerns that not enough studies have been done on the environmental impacts of the development, Mayor Greg Bryan emphasized construction would not begin just yet.

"All we are doing is changing the zoning and not allowing them to move ahead with the development until studies are supplied," he said. "I think it is important to understand that."

Last February, the Tusayan Town Council received a letter from the Stilo Group, indicating a desire to work through some development applications. The town's planning staff and attorney were in discussions with Stilo for about four or five months. A development agreement was signed and presented to the town, signed only by Stilo and the developer afterward brought the applications to the town for a variety of topics and annexations.

Town staff and attorney continued to work with the applicants, typical for any application for rezoning, to be sure they understood the coding requirements of the town and submitted and reviewed.

On Oct. 26 the plan went back to the council for final approval. If approved, the plan will go before the Tusayan Town Council as early as their next regular meeting on Nov. 2. See next week's edition of the News for details.