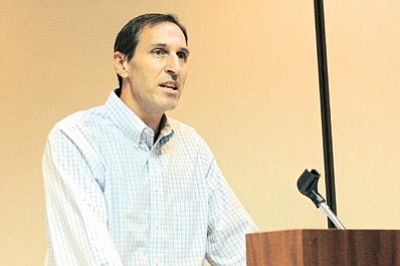 The move to approve the rezoning made Monday night is the next step in the development process proposed by the developer in February. There will be another public hearing on the development applications during Tusayan Town Council's regular meeting Wednesday. After public comments on the proposals are heard, the council could take action on the recommendations during their Nov. 2 meeting.

Based on discussion and public comment from the town's P&Z public hearing on Oct. 17, the commission directed town staff to work with Stilo Group to address a number of items raised.

Some of the changes made were to update responses to public comment from Stilo Group, modify the definition of the term "occupancy and hotel," for hostels, motels and hotels from 180 day stays to 30 days and allow for a maximum 32 lots of park model homes on a proposed lot at Ten-X Ranch located on the north end of the parcel in a separate subdivision.

Prior to the approval of any site plan by the council, the developers will be required to identify an adequate water supply.

The commission required the removal of "entertainment and leisure" attractions from the permitted uses table in the Ten X application in order to prohibit the development of amusement parks, casinos, convention centers and regional malls.

"One thing that Ms. Oberholtzer said that struck me was that once you make the zoning change it's permanent," he said, referring to comments during a previous P&Z meeting from the Rose Law Group Attorney representing local business Red Feather Properties.

For this reason, Fitzgerald voted against rezoning Camper Village to a Planned Community (PC) zone, as well as rezoning Kotzin and Ten-X Ranch from General to PC zone.

According to Tusayan Town Planner Mark Reddie, overall, 70 changes were made to the Camper Village, Kotzin Ranch and Ten-X Ranch applications before their approval.