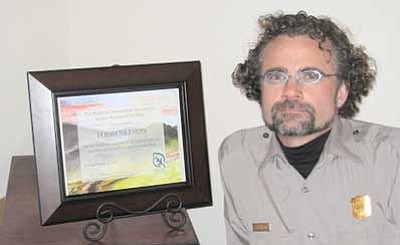 According to Tom Moutsos, SCA's Southwest Program Manager for Conservation Crews, the award is intended to recognize contacts with agencies like the National Park Service "who go above and beyond" in support of SCA's programs.

"Todd worked hard to secure funding for three SCA Leader Crews this year and worked closely with us to develop a contingency plan when it looked like the federal government would shut down one day after a Leader Crew arrived," Moutsos said.

Moutsos added Nelson "came to the rescue" by arranging for a high school crew to spend 21 days working on the North Rim when their scheduled project at a nearby park was cancelled with only a few days notice due to fire activity.

The award was presented to Nelson by SCA's Justin Laue, program coordinator for the Southwest Region.