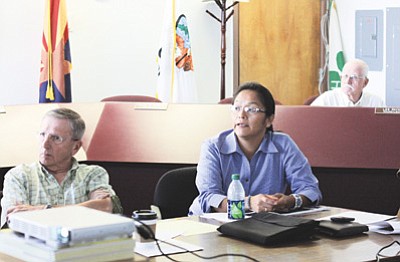 WILLIAMS - The Havasupai Tribe council members met with Williams City Council during a special meeting Sept. 27 in hopes of strengthening governmental relations, securing the city's support in opposing future Tusayan development and to inform the council as to what the tribe is currently pursuing in regards to their federally reserved water rights.

The Havasupai tribe has approximately 680 members, most of whom reside in the Village of Supai, located within Havasu Canyon. The village is isolated, accessible only by helicopter, foot or pack animal.

The reservation contains 6.4 miles of creek that runs year round. The tribe manage their own water and sewer systems, supplied by three shallow wells that each produce approximately 200 g.p.m. of very high quality water.

Helen Burtis, attorney with Rosette L.L.P and representing the Havasupai tribe said the Havasupai tribe is currently meeting with all of its neighbors on the Coconino Plateau, discussing what they are trying to accomplish in terms of the tribe's federally reserved water rights.

Havasupai Councilwoman Carletta Tilousi presented to the Williams City Council what legal steps the tribe is going through in order to quantify their water rights claims.

The federal government recognizes water rights for reservations, regardless of whether the water is used or not.

"We want to make sure at this time that the tribe has a right to make its legal claim to the water that's going right through the creek," Tilousi said, adding that it took a while for the tribe to realize that this was a priority.

Burtis told council members that tribes have the right to water whether they perfect their claims or not.

"But on a practical level, whether or not the tribe perfects it's claims and then non-tribal interests come in and develop and start using water, it's hard to undo development," she said.

Currently the tribe's total consumption of water is about 3,450 acre-feet per year, which will be affected if development in the neighboring town of Tusayan goes ahead. Burtis said it could almost double ground water withdrawal from the area.

During the meeting, the city of Williams was asked to provide a letter of support for the employment of a federal negotiations team by the tribe, which council members will discuss at a future regular meeting.

"What that involves is not a statement that the city of Williams agrees with the tribe's desires for its water claims, just that the city supports the United States setting aside resources to form a negotiating team that the claim can be examined from a legal perspective," Burtis said.

Mayor John Moore said the Havasupai Tribe and the city of Williams are "in the same boat" regarding the possible consequences of significant development near the Grand Canyon.

"I think we are the guys here at the end of the spectrum, so I think we should support each other as much as we can," he said.

Moore went on to say that he doesn't want to see Tusayan turn into a Disneyland.

"We sat on a committee up there in Tusayan a while back and I remember thinking, 'we are going to do this and it's going to grow tremendously and it is going to hurt the town of Williams because of the growth, and it could even hurt the Havasupai down in the Canyon," he said.

Tilousi said the Havasupai tribe was informed about Tusayan's Sept. 21 council meeting and public hearing on the possible annexation of Ten-X Ranch at the last minute. The tribal council members flew out of the Canyon in a helicopter to attend.

"We made a public comment regarding the water and the protection of our sacred places," she said. "There were only three people from the town of Tusayan that made a comment. I was very disappointed, and I would really encourage you all to submit something to them because they told me the city of Williams is silent on this issue."

Tilousi said even though the tribe is concerned about all the areas planned for development in Tusayan, they are most concerned about Ten X Ranch, a sacred place to the Havasupai's oral culture.

"The tribe is going to do whatever they have to do, but we don't want to become law-suit friendly," she added.

Williams City Council members committed to work with the Havasupai Tribe to "revitalize" a Memorandum of Understanding currently on the books, updating the language to reflect the tribe's current situation.

Council members also directed Williams City Attorney Kellie Peterson to draft up a letter in support of the Havasupai Tribe's concerns regarding Tusayan's proposed annexation of Ten X Ranch and what effect development in that region will have on the Havasupai's water source, sacred places and archeological sites.