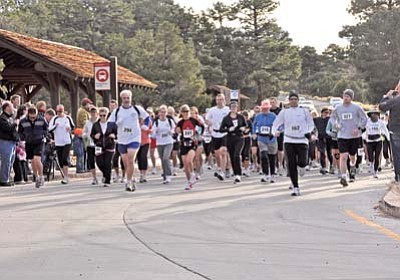 GRAND CANYON, Ariz. - In the coming weeks, the Grand Canyon area will likely see almost 1000 runners from all over the southwest take part in one of the premier running events in the region - the Grand Canyon Marathon and the Tusayan Half Marathon.

GC Marathon is unique in the fact that it is the only marathon in the United States that has a permit to hold an event like this inside a national park. The National Park Service (NPS) permit, held by the marathon organizers allow for just 300 marathon runners inside the park, crafting a small, intimate event. New this year, The Grand Canyon Marathon will be a USTAF certified course and is a Boston Marathon qualifier.

The Nov. 12 race is in its third year. It began with the mission of creating a way for the Grand Canyon community to come together in the off-season and put on a world-class foot race, with all proceeds going toward Grand Canyon High School scholarships and the Grand Canyon Recreation Center.

"We are all doing this to help get people to know each other from across different companies in the community," GC Marathon Director Jeanie Sharp said.

Sharp said there will be some changes to the Tusayan Half Marathon this year, a race that creates an option for those runners wishing to participate in a shorter distance, but still enjoy the natural beauty of the Kaibab National Forest.

"The half marathon is still run in a national forest, except this year they are not running on the rim," Sharp said. "The half-marathon gives us the opportunity to grow, because the park service only allows for 300 runners inside the park."

Co-Director Leonard Pierce said it is important to note that the NPS and the Kaibab Forest Service play a vital role in the event's organization.

"They have been very cooperative," Pierce said. "The race is a huge benefit to the park itself, it introduces newcomers to the canyon because the route goes right by the lookout points, and the very end of our route this year is going to go right by what has recently been opened this year, the Freedom Trail.

So our runners come up here not only to run, but to also to see the Grand Canyon, the solitude of the forest and, this year, have the opportunity to place some footprints on the new Freedom Trail, which is pretty nice."

The Grand Canyon Chamber and Visitors Bureau is supporting this year's event. Sharp said Chamber Board President Mike Rock and Chamber Director Josie Bustillos have been a significant force in assisting with the event's organization.

And, perhaps most importantly, event organizers are still in the process adding the most essential ingredient - volunteers.

"Our volunteers come from the community," Pierce said. "This year we are going to meet right at 90 volunteers and right now we have about 40 or 50 signed up. There is still a great need."

Sharp added that volunteering is a fun, energetic experience, giving people the opportunity to make new friends and share in the enjoyment of a very special day.

Along with volunteers, sponsors are a vital part of the race's success. Sponsors of the event will not only have the opportunity to expose their brand to a targeted audience of marathoners and runners the world over, but will also secure their position as a supporter of one of the most exclusive and premier running events in the region.

"We still are welcoming sponsors, it is important to mention that this event is a non-for-profit, it is totally run by volunteers and all the funds go back to the Grand Canyon Recreation Center," Sharp said.

The Squire Inn will be offering a pre-race dinner after the runner's orientation meeting, which will be held Friday night at the IMAX Theater. Sharp said all runners are strongly encouraged to attend the meeting, which will give them course specifics and safety information.

"For example, we are a cup free race, which means every runner must carry a water bottle with them," Sharp said. "Refill stations will be about every two miles."

Safety is also strong priority for race organizers. The Tusayan Fire Dept will be supplying EMT's at each water refill station, and an ambulance inside Forest Service land. An NPS ambulance will also be inside the park in case of an emergency.

Massage, acupuncture and chiropractor vendors will be present, as well as Muscle Milk Nutrition.

Four local hotels are offering discounts for the event, and Xanterra is offering two of their lodges inside the park. More details on discounted housing options can be found on their website, www.grandcanyonmarathon.com.