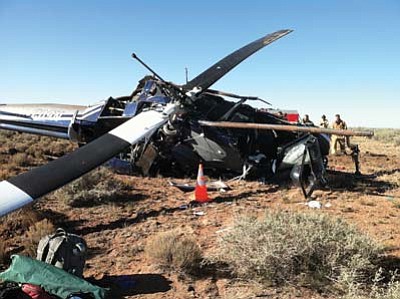 FLAGSTAFF, Ariz. - A helicopter crashed about four miles west of Valle Airport, injuring the pilot who was the sole occupant.

At approximately 8:37 a.m. on Nov. 15, the pilot of a Bell UH-1H Huey helicopter made a 911 call to the Flagstaff/Coconino County 911 Communications Center advising he had crashed after experiencing a mechanical failure in the helicopter he was flying.

The pilot, identified as 57-year-old Jeff Boatman of Glendale, Ariz., reported the transmission had failed and he was in the process of trying to land the helicopter when the crash occurred.

Boatman told the dispatcher his approximate location and that he was injured and pinned inside the wreckage.

The Bell helicopter that crashed is owned by Aero Leasing of Glendale and operated by Airwest also of Glendale. Airwest provides contract services to the Havasupai Tribe.

Initial information indicates Boatman had just taken off from Valle Airport with a destination of the Hilltop area just above Havasupai Falls. Reports from first responders are that Boatman suffered serious, but non-life threatening injuries.