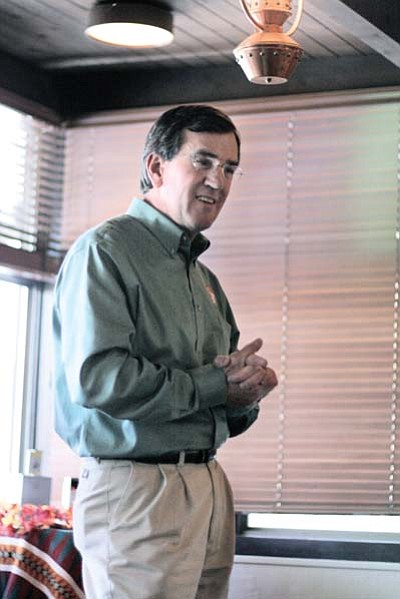 GRAND CANYON, Ariz. - About four months in to his new position, Grand Canyon Park Superintendent Dave Uberuaga has already rolled up his sleeves and gone to work, rallying local residents to help make the park a better place.

"What is one thing that is working at the Grand Canyon? What is one thing that needs improvement? And if I were superintendent, I would, fill in the blank," he asked, adding that these questions have proven insightful and helpful for him in providing an open forum with the public to help improve the park.

Uberuaga mentioned potential renovations to Kolb Studio and Bright Angel Trail. In 2015, the NPS will celebrate its centennial anniversary with several projects planned in conjunction with the event, with help from corporate donors.

"We want to define the trailhead a little bit more making it visitor friendly with some toilets and benches and shade structure and water fountains," he said.

Rotarian Dave Beckerleg asked about the lack of available health care in the Grand Canyon area. He said there is never enough health care, but it is needed for both visitors and residents.

The superintendent said this was due to the change in the National Park Service's business models. Keeping those public services haven't been financially practical.

"Originally, Yosemite, Grand Canyon and Yellowstone parks had hospitals that served everyone. Yosemite lost almost one million a year in their operations, contracting out medical providers, housing, etc.," Uberuaga said. "The park service doesn't allow us to go out on our contract, and bid on it, when it is a loser, they don't make money."

But, at Grand Canyon a healthcare facility is a necessity, he added.

Another park issue addressed by Uberuaga was the failed attempt to ban plastic water bottles inside the park. That morning, the scrapped program made national headlines.

Towards the beginning of 2011, the Park Service began to assess how reusable water bottle programs might be implemented on a national level. Zion National Park in Utah and Hawaii Volcanoes completely banned the sale of plastic water bottles within their park boundaries and it was the goal of the Grand Canyon National Park to follow suite.

"The New York Times article said it was because Coca-Cola had donated 13 million to the parks," Uberuaga told Rotarians. "So the investigative reporter was making the connection between us saying yes and then no and the fact that we have a donor being the Coca Cola Company. Coca Cola said, 'we've never said a thing to the Park Service, the National Park Foundation that was the recipient of that said that never went back and forth. I'm not sure where we are going to go from there."

According to Uberuaga, a reporter contacted him to ask questions like how many water bottles go over the edge and how many are sold, among others. Uberuaga told the reporter that he didn't know, but that in principle, NPS wants to reduce the amount of plastic inside the park. But, the right way to do it is not to "cut everyone off day one."

In Uberuaga's opinion, people are ready to wean themselves off the plastic bottles, but the article raises the issue that the park didn't ban them completely.

"The long and the short is, we should be banning plastic bottles. We were very close to doing it," he said. "The article implied that the Park Service got paid off for not banning the bottles, which was the spin on the article."

Where does the Park Service go from here? Uberuaga said he's not sure what is going to happen, but there is plenty of evidence around the park that people want to recycle and want to refill their bottles instead of creating waste.

"I was at the grocery store and saw 35,000 on the counter of one of their water refill stations," Uberuaga said. "We've installed all these refill stations, and people are buying reusable bottles."