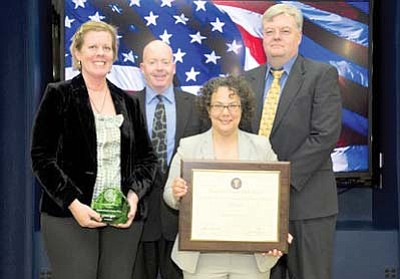 "President Obama challenged the Federal community to lead by example to improve efficiency, cut waste and pollution, and promote clean energy," said National Park Service Director Jonathan B. Jarvis. "The Grand Canyon Team exemplifies how the National Park Service is meeting the President's challenge, and shows that you can make decisions that protect clean air and water, dramatically improve energy efficiency, and reduce costs - all at the same time."

CEQ solicited award nominations and, along with a panel of judges including Federal and local decision makers, reviewed the nominations and recommended the 2011 award recipients to the President. The eight winners, selected from nearly 250 nominations, were recognized at a White House ceremony.

The Grand Canyon Green Team was able to give residents and businesses in rural communities the opportunity to act responsibly by reducing hazardous and electronic waste, extending cooperative conservation beyond park boundaries. The partnership helped divert over 56 tons of waste from local community landfills, including 214 large appliances, 34,617 pounds of electronics, and 600 tires. Additionally, the Green Team created a model for other Federal facilities that are located away from densely populated areas where conventional recycling efforts are not feasible.