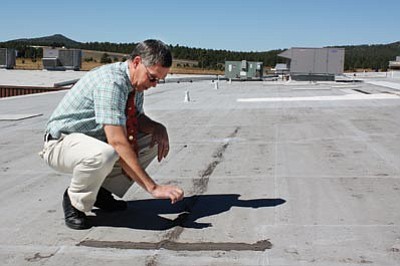 Ryan Williams/WGCN<br> A portion of the Williams Elementary -Middle School roof will be repaired with $1,489,306 in Emergency Deficiencies Correction funding. The district had sought $5.5 million in bond funding for more extensive repairs on school facilities.

WILLIAMS, Ariz. - A $5 million bond for capital improvements in the Williams Unified School District (WUSD) was quashed by Williams voters at the polls Nov. 8. Citizens voted down the bond with 53 percent voting no and 46 percent voting yes. Turnout was 27 percent. Of 2,998 registered voters, just 810 made their way to the polls.

Passage of the bond would have allowed the district to complete what district officials called a variety of safety-related construction projects for both the Williams High School and Williams Elementary-Middle School (WEMS).

WUSD Superintendant Steve Hudgens said the downfall of the bond was disappointing.

"It's just unfortunate," Hudgens said. "It really is."

Hudgens added the economy likely affected voters' decision not to back the proposed bond but added the district will likely continue to pursue bond funding down the road. In the meantime, administrators and teachers will continue to work in aging facilities.

"Things have to go on," Hudgens said. "You just don't shut the doors and kick everybody out."

WUSD was recently awarded $1,489,306 in Emergency Deficiencies Correction (EDC) funding from the Arizona School Facilities Board to help replace portions of the Williams Elementary-Middle School (WEMS) roof and replace the ceiling in the Williams High School (WHS) gym.

"The net will come down in the gym.," he said. "We'll get the ceiling replaced. That won't have anything to do with the walls, the lighting, unsafe bleachers or the inadequate security system we have in the school. They'll do their little part on the roof down at the elementary school."

This time around, the proposed school improvement bond focused on a set of more specific school facilities in need of repair. If approved, $2,001,000 of the funds would have been used to finish repairs of the WEMS roof begun with emergency funding. Work included removing existing double roofing, patching structural roof deck and replacing the double roofing with a new single ply roofing system.

Vehicle circulation, parking and improvements to the bus storage building also would have benefited from the bond funding. The WEMS softball field would have received an overhaul due to an invasion of prairie dogs, rendering the field unsafe for children.

Hudgens said many of the proposed projects will be abandoned.

"We're going to do what we're paid to do. We're going to see that the kids are as safe as they can possibly be in our system," he said. "We're going to go on with the learning process full bore. It's just that some of the things will get a little more limited."

Costs to taxpayers were estimated to be $32 annually for homes valued at $100,000. Under Arizona law, bond issues must be approved by 15 percent of registered voters who voted in the last election. Once a bond has been approved, school districts are obligated to hold public hearings to inform the public on how bond funds are spent.