Win over Tuba City sends Vikes to playoffs
Williams to face St. Johns in first round of playoffs Friday 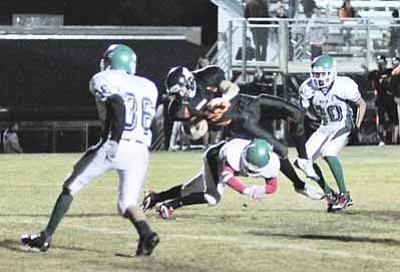 WILLIAMS - A 48-6 victory over Tuba City Oct. 28 earned the Williams High School Vikings a playoff game against St. Johns and a No. 12 power point ranking for the season. But, the Vikes will hit the field on Friday without their starting quarterback.

Following an altercation near the start of the third quarter, Quarterback Jeff Brownlee Jr. and Kohl Nixon were ejected from the game and given one-game suspensions.

More on that later.

At the start of the first quarter, Brownlee Jr. ran for two yards and a touchdown followed by a missed extra point.

After Brownlee Jr.'s initial touchdown, the Vikings defense dominated the rest of the half and over the course of the game scored 20 points for the Vikes.

"That's fantastic," Brownlee said. "Our defense is playing very well. They're feeling the game and hitting and they're doing an outstanding job."

Oscar Nunez started things off for the defense returning an interception for a touchdown again followed by a failed extra point. On the Vikes' next possession, Jimmy Perkins gathered up a fumble and ran 26 yards for a touchdown.

The Vikings defense continued to shut down Tuba City's offense. Adrian Solano found the end zone after a 48-yard run followed by a missed extra point. Heading into the locker room at half time the Vikes held a commending 40-0 lead.

In the third quarter, Aiden Grantham intercepted a Tuba pass, running the ball back for a 58-yard touchdown followed by a two-point conversion pass from Grantham to Robby Batterten.

After giving up a touchdown to Tuba City in the fourth quarter, the Vikes walked off the field with the win.

Now, back to player suspensions. According to Brownlee, Tuba City worked hard to get under the Vikings skin throughout the first half. During half time, he said the coaching staff talked to the players about keeping their cool and composure throughout the remainder of the game.

Heading onto the field for the second half, the Vikes planned to play their varsity offensive and defensive squads one possession before sending in the JV team. Everything went smoothly for the defense but on the first offensive possession, things took a turn for the worse.

After what Brownlee called an "extremely" late hit on Brownlee Jr., the Viking quarterback retaliated.

"He gets up and he's not thinking and he wants to try to defend himself," Brownlee said. "We lost our composure as a team. Both teams got out there and pushed each other around and then it was broken up."

Both Brownlee Jr. and Kohl Nixon were ejected from the game and suspended for this week's playoff game.

Brownlee said Tuba City crossed the line with the late hit, which was not called a penalty.

"Both kids wish they could change what happened," Brownlee said. "They are responsible for their actions. They understand what happened. But they wish it had not happened."

Brownlee said the incident does not represent the way his players normally conduct themselves.

"That's not the way I coach. That's not the way our kids play," he said. "We are a family. You can tell on that football field. They were defending each other even though it's not the right way to handle something like that. As a coaching staff we certainly don't condone that."

Grantham will step into the quarterback position against St. Johns Friday.