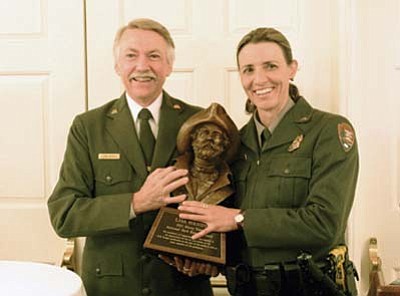 NPS Director Jon Jarvis said the recipient is chosen by their peers.

"Each year, we ask those rangers who tackle the toughest assignments, protecting park resources and the nearly 300 million people who visit our national parks annually, to single out one among them that epitomizes the ranger ethic," he said. "We give that person the Harry Yount Award."

According to the award nomination submitted by Grand Canyon National Park's Chief Ranger Bill Wright, Hendy has earned it.

"Ranger Hendy is one of those rangers that can be sent to any call. She is one of that rare breed that simply excel at every aspect of rangering," he said.

He explained that on any given day she could be found rappelling over the edge to stabilize a patient, working with the park's Special Response Team to do a building sweep, responding with the structural fire engine to a burning RV, providing advanced life support care as a paramedic, being short-hauled to a victim on the river, or patrolling the backcountry - checking permits, stirring toilets, assessing archeological sites - the list goes on.

Hendy, an intelligent, energetic woman with a big smile and tremendous dedication, said that hers was "a career built on the wisdom and teachings of (other) rangers."

Speaking of the lessons she had learned from supervisors and rangers she has worked with over the years, she said she estimates that it has taken at least 50 rangers to build the ranger you have standing before you today.

"That means for every ranger like me, there are at least 50 of them out there," she said.

It was clear that Hendy felt honored and privileged to have worked with each and every one of them.

"The Harry Yount Award and rangers like Lisa Hendy represent the very best in the ranger service," Uberuaga said. "They give us all something to strive for. I congratulate Lisa on setting the bar particularly high."

Hendy was born in Chattanooga, Tenn. and attended Auburn University. Over the years, she has worked in Yosemite, Rocky Mountain, Arches and Yellowstone National Parks. In 2004, she accepted a position as a law enforcement ranger in Grand Canyon National Park's Canyon District where she still works today.