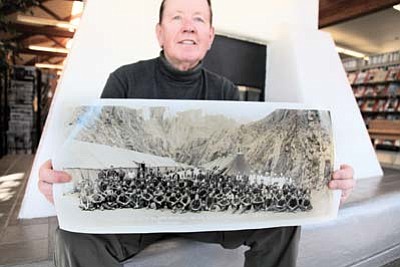 It may seem unlikely that during the Great Depression, Grand Canyon National Park would undergo a variety of infrastructure improvements but, that is exactly what happened thanks to the work of the Civilian Conservation Corps (CCC).

Audretsch grew up in Detroit and, on vacations to the west, fell in love with the National Parks.

"I thought 'oh these park rangers are so cool,'" he said.

"That was my second career," he said. "My third career is as a historian. It's just more following my dream is really what it is."

While at the Canyon, Audretsch attended a 2002 Grand Canyon History Symposium where he had the good fortune to hear Roy Lemons speak about his time in the CCC at Grand Canyon. According to Audretsch, at age 16, Lemons said he had lost all hope that there could be anything good to come in his future but that with the election of Roosevelt and the founding of the CCC, hope came back into his life.

"He had people in the audience, including me, crying," Audretsch said. "That got me interested. It wasn't the dry history book stuff. It was the real emotional facts. I think for me the CCC story is a positive one because it is about hope."

Founded by Roosevelt in 1933, the CCC put young men between the ages of 18 and 25 to work in jobs related to the conservation and development of natural resources in rural government owned lands. The program provided employment for young men in "relief families" who had difficulty finding jobs during the Great Depression and implemented a natural resource conservation program in every state and territory.

Audretsch said, eventually, roughly 3 million men went through the program. Those in the program were required to contribute $25 out of their monthly $30 salary back to their families.

Long before Audretsch began writing his book on the CCC, he helped to produce an exhibit at the park entitled "It Saved My Life: The Civilian Conservation Corps at Grand Canyon, 1933-1942" along with fellow ranger Pam Cox, James Schenck, historian Mike Anderson, the help of the Grand Canyon Association, the park service and many others.

The experience prompted Audretsch to begin research work for his "Shaping the Park" monograph. The book features over 70 historic photos, most made public for the first time, along with numerous accounts of the experiences of CCC men, in their own words in a clear, easy-to-understand, writing style.

Audretsch said while writing the book, he found many parallels between the CC era and the current day.

"When you think about it, some of the things going on today are very similar to what was going on, maybe not as extreme, as what were going on in 1929 and in the 30s," Audretsch said. "People starving sometime, things like this. People preaching revolution. Preaching radical change and so on. And, here you have a situation where you have a great president, Franklin Delano Roosevelt, he makes five agencies work together and they do it. You wonder if it could happen again."

Audretsch said while the success of the CCC is a remarkable story, not many people know about.

"When I was at the canyon doing programs about the CCC, people loved it," Audretsch said. "Inevitably, at the end of almost half of my programs, somebody would come up and go 'well, you know my grandfather was in the CCC but I don't know much about it. I'm so happy to learn more because granddad is dead now and we never had a chance to ask him much about it. You know. That kind of thing."

The fruits of the program exist to this day at Grand Canyon including the rest houses along the Bright Angel Trail. Trails were constructed, telephone lines installed and buildings and fences built.

Audretsch is currently researching a second book on the CCC, focused on the agency's activities in north Arizona, specifically in the Arizona strip.