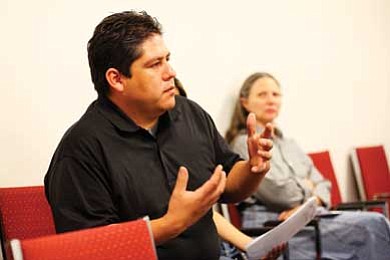 WILLIAMS - As it turns out, creating an ordinance regulating noise in downtown Williams isn't such an easy task. Despite previously voting to set a noise curfew hour in commercially zoned areas at 12 a.m., Williams City Council members spent considerable time during their May 26 regular meeting wrestling with the decision.

Councilman Bill Miller said he would like the noise cut-off to be re-designated at 11 p.m.

Before a first reading of the proposed noise ordinance, debate ensued among council members and city staff as to whether changes could be made prior to the reading.

"We don't have a discussion or take action at this point. It's time to read it," she said.

Despite the previous vote in favor of 12 a.m., Miller made a motion to delay the reading.

Petersen said changes could be discussed once the ordinance is read as it stands.

Williams Econolodge owner Hugo Correa agreed with Councilman Miller from the audience, saying the hour difference is a make or break situation for his business.

"If I get a midnight type of curfew, I'm not going to be able to book my rooms," he said. "My season is just as short as the bars and motels. If I can't sell 30 of my rooms, I can't generate enough money. Mind you, September, October, November, December, January, February - I'm dead. I'm just above water."

Following Correa's comments, Williams Mayor John Moore suggested tabling the reading due to the public's perception that council had decided on a 12 a.m. curfew.

"If we make an adjustment now, we're going to have to give the opportunity to hear from some of the same folks we heard from the last time," Moore said.

Councilman Don Dent said he was under the impression changes were allowable up until the ordinance's final passage.

Petersen said after hearing council discussion, she now understood Miller's request and a motion could be made to read the ordinance subject to council's changes.

Miller then motioned to read the ordinance with an earlier curfew hour.

Dent seconded Miller's motion to read the ordinance with a change to an 11 p.m. curfew for commercial zones.

"I would ask as the Chief, that there would be a difference with the residential" Nixon said. "Residential, I think should be 10 p.m."

Council members eventually voted on changing the commercial curfew hour to 11 p.m. and residential hour to 10 p.m. as motioned by Miller.

After a 4-3 split vote with Dent, Miller and Councilman James Wurgler voting in favor of the earlier curfew and Councilmen Lee Payne, Frank McNelly, Bernie Hiemenz and Mayor Moore in opposition, the 12 a.m. curfew remained.

2011 Year in Review: The top stories in and around Williams
Loud debate over prospective noise ordinance continues
Too loud in Williams?
Talk of noise continues
Round three for city of Williams animal ordinance
Event Calendar