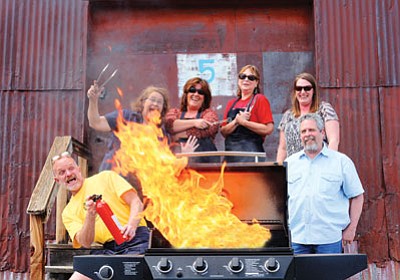 WILLIAMS - Barbecue is back this upcoming Fourth of July weekend. After a successful professional barbecue competition last year, organizers are turning up the heat on the Second Annual Northern Arizona Barbeque Festival.

Teams will begin arriving in Williams on Thursday, July 1 for the state competition. This year's event features an opening night party that evening at 6 p.m.

Williams-Grand Canyon Chamber of Commerce Events Coordinator Sue Atkinson said the party will be a great way for locals to kick off the event.

"Come out and meet the barbecue teams, hang out at the beer garden, have barbecue meals," Atkinson said. "We'll have vendors on hand. Bands playing from nine to midnight. This is just a great chance for the public to come out and meet some of the teams."

Route 66 Catering and Satchmo's from Flagstaff will provide barbecue meals at the party.

"We're pushing really hard to get 40 teams," Vaughn said. "Saturday at 10 a.m. the gates open and everything will be in full swing. Beer, barbecue and bands will be on tap. At 2 p.m. an Irish band will be playing and Saturday night, local band Rewired Madness, who has played on Whiskey Row among other places, will be playing."

New to the event this year will be the Backyard Barbecue Throw Down held on Sunday.

Vaughn said local teams will set up at 9 a.m. with judging taking place at 12 p.m. An entry fee of $20 per team will go to the Special Olympics.

"We'll pull judges out of the audience," he said. "There will be a burger competition, a chicken competition and then if you want, a cooks choice. We're going to even allow grills. Not everybody can afford a $4,000 smoker."

Atkinson said the Sunday competition is all about fun.

"We want to get the locals out," she said.

Local band The Sweet Lemon will provide musical entertainment during the throw down.

"For our second annual barbecue, we want to turn up the heat," Vaughn said.

Got barbecue?
Fireworks return for Fourth of July celebration
Cowpuncher's Reunion Rodeo and Northern Arizona Barbecue Festival to team up in Williams
Fireworks on the Fourth in Williams?
BBQ returns to Williams bigger and better than ever
Event Calendar