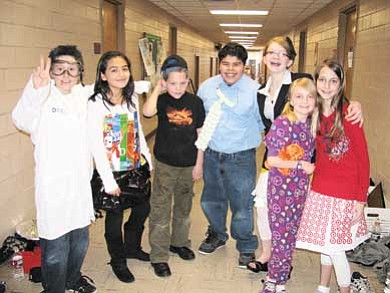 GRAND CANYON, Ariz. - The Grand Canyon School (GCS) Odyssey of the Mind (OM) team spent last Saturday making final adjustments to their competition problem and props in preparation for their appearance at the World Finals.

The 32nd World Finals competition takes place May 27-30 at the University of Maryland in College Park.

According to Andy Pearce, team coach, Grand Canyon School has sent a team to the World Finals almost every year since fielding an OM team.

"It's a big deal given that this is a really small school," he said. "When we're at World Finals you look around and realize that we're probably one of the smaller public schools represented at World Finals. So that says a lot for the kids. It says a lot about the school's dedication to the program and the coaches."

The GCS team will compete against 60 other teams. A total of 800 teams will compete in different categories from approximately 20 countries during the four-day event.

"It's a great opportunity for the kids to experience a big competition," Pearce said.

Pearce said the team and OM program receives tremendous support from a variety of local businesses and organizations, among them the Lions Club, Rotary on the Rim, American Legion and PTA.

While fundraising efforts have been successful with the team close to its goal, Pearce said they are still accepting donations. To send the team of six students and two coaches to the finals it will cost approximately $10,000.

One of the most successful fundraising efforts for the team has been highway clean-ups for businesses. The team will hold a garage sale on Saturday in the Park Circle area to raise more funds.

The team will present the same problem at the world finals as the one they have been successful with in their previous competitions.

"They are making improvements," Pearce said.

Along with the competition, the OM team will have ample time to interact with kids from other cultures on their trip. The GCS students will even be paired with a team from India - their "Buddy Team."

Each day the GCS team and the team from India will meet for social activities. The GCS team will also help their Indian counterparts navigate being in a new culture for the first time. The two teams will also exchange gifts.

"That is actually the other thing that we like to get donations of," Pearce said. "Anything that is Grand Canyon related that is fairly small that we can present as part of a bag of gifts. That is a big opportunity to directly interact with kids from another country."

In past years, the GCS team has been paired with teams from China, Poland and South Korea.

Gunter Morris, making his first appearance at a world final competition, said he is very excited to make the trip.

"I've heard that there are carnivals and stuff over there," he said. "My favorite thing would probably be meeting another buddy team from India."

Team veteran Kyla Pearce has attended the world finals competition for three years. She said the opening and closing Olympic-style ceremonies are a highlight.

"You get to look around the stadium and see people from all over the world," she said. "And then I like the buddy team. Getting to meet them and do stuff with them. It's pretty cool."

She said OM has taught her the benefits of teamwork as well as helped her learn to speak in front of large groups.

"Now I speak on stage more and I'm not afraid," Pearce said.

For more information on Odyssey of the Mind, visit www.odysseyofthemind.com. To make a donation to the program at Grand Canyon School, call (928) 638-2461.