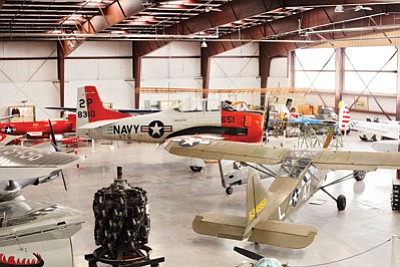 May is Museum Month. It is not difficult to celebrate the occasion since a wonderful museum is located locally. The Planes of Fame Museum in Valle is a satellite of one of the oldest aviation museums in the world - the Planes of Fame in Chino, Calif. The Planes of Fame Museums were among the first to restore aircraft in their collections to air-worthy condition. The Valle Museum has many one-of-a-kind still flying airplanes including General MacArthur's C-121A Constellation, the only flying Conveyor 240 in the world and the last Martin 404 still flying.

Planes of Fame is world-renowned among aviation enthusiasts. Many of the aircrafts in their fleet have starred in some famous movies - the P-40 in "Valkyrie;" the Skyraider in "Flight of the Intruders" and again in "We were Soldiers;" the B-25 in "Forever Young;" the Japanese Val in "Tora, Tora, Tora," "Pearl Harbor" and "The Aviator;" and the Stearman PT-17 in "Rocky and Bullwinkle."

The museum's curator, Bob Reed, clearly loves what he does and it shows. Planes of Fame is a great tourism asset to our culturally rich area. Visit the museum at 755 Mustang Way at the junction of Highways 64 and 180 north of Williams during the month of May to celebrate Museum Month. Also, plan to attend the High Country Warbirds Fly-In on June 25 - easily the most exciting day of the year at Planes of Fame. P-51 Mustangs, the P-40, the B-25, and the P-38 are a few of the planes to take to the sky that day. Find out more at (928) 635-1000 or www.planesoffame.org.