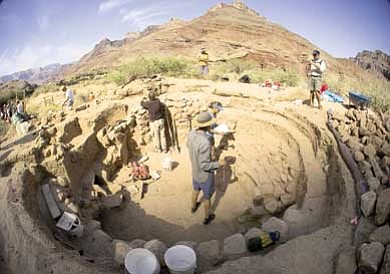 Photo/Tom Bartels<br> A kiva feature is excavated from the Palisades site in the Grand Canyon. The excavation, the first in nearly 40 years in the park, was the result of collaboration between the National Park Service, Museum of Northern Arizona and the Grand Canyon Association.

GRAND CANYON, Ariz. - Archeological excavation inside the Grand Canyon is a rarity. But, between 2007 and 2009, excavations at nine sites along the Colorado River took place and, now through September, the project and artifacts recovered during the digs will be on display at Kolb Studio.

Grand Archaeology: Excavation and Discovery along the Colorado River, consists of interpretive panels, artifacts recovered during the excavation, representative tools the crews used during excavation and an interactive virtual tour. It tells the story of what was learned about the people who lived in the Canyon hundreds and thousands of years ago and about the challenges of conducting archaeological research in the remote setting of the Colorado River at the bottom of Grand Canyon.

This free exhibit will be on display at the Kolb Studio from 8a.m.-7p.m. daily through September 7. The exhibit will then be on display at the Museum of Northern Arizona for one year beginning October 1. The Grand Archaeology exhibit is the result of collaboration between the National Park Service (NPS), Museum of Northern Arizona, and the Grand Canyon Association (GCA), the official partner of Grand Canyon National Park.

The Grand Archaeology project consisted of excavations at nine archaeological sites that were being impacted by erosion and could not be stabilized in place. The excavations were conducted cooperatively with the Museum of Northern Arizona and represent the results of the first major excavations in nearly 40 years in the park.

The National Park Service has a preservation mandate, making archaeological excavations uncommon and undertaken only when sites cannot be preserved in place.

According to Deputy Chief of Science and Resource Management Excavation Jan Balsom, the excavations provided a rare opportunity for archaeological research in the park.

"This project provided some important insights into the prehistory of the river corridor," she said. "Some sites were used repeatedly over a long period of time; others revealed evidence of prehistoric cotton cultivation, beautiful masonry work, and evidence of jewelry manufacture. Altogether, this project has greatly enhanced our understanding of the lives of the people who lived here in the past."

Balsom added it is extremely important to share the findings with the public via an exhibit in Kolb Studio and at the Museum of Northern Arizona.

"Not only does the exhibit include some of the artifacts recovered during the excavation, it communicates what life was like for the people who lived along the river and the methods archaeologists use to learn about the past," Balsom said.

The excavation project was funded by park entrance fees through the Federal Recreation Lands Enhancement Act. Public outreach has been an integral part of the project since its inception. More than 2000 Colorado River trip participants were able to view the excavations in progress, and a professional photographer and videographer were at more than half the sites to document the scientific work. In addition to the Grand Archaeology

exhibit, two multimedia features on the project are also available on the park's website.

The Grand Canyon River Archeology Virtual Tour available online at www.nps.gov/features/grca/001/archeology/index.html includes four excavated sites, along with overviews from the South Rim and along the river corridor. Viewers of the virtual tour can enter excavated rooms, and click on information tabs to learn more about features within rooms, such as hearths and ventilator shafts, and learn more about the excavation tools that archaeologists use.

"The virtual tour is a tremendous learning tool," Balsom said. "Not only is it fun to be able to look around the rooms, but the tour contains a great deal of explanatory material. Since the sites have been re-buried to protect them from further erosion, the virtual tour is the only way to now view these sites."

"Archeology along the Colorado River," at www.nps.gov/grca/historyculture/archeology-along-the-colorado-river-video.htm, is an approximately 15-minute video on the excavation project that features footage of the excavations and interviews with archeologists and tribal elders conducted during the project. The video not only overviews the excavations, but offers insights into the significance of the work.

Grand Canyon National Park Acting Superintendent Barclay Trimble said the park is very excited to have the exhibit at Kolb Studio and to have partnered with the Museum of Northern Arizona in the research project.

"Many people are unaware that Grand Canyon National Park has such a long record of human use and occupation," Trimble said. "This exhibit shares some of the challenges we face relative to conservation work the National Park Service does to manage this special place and how we work cooperatively with organizations such as the Museum of Northern Arizona to learn more about park resources."

GCA presents exhibits in Kolb Studio to foster stewardship and inspire a sense of wonder for visitors from around the world.

GCA Chief Executive Officer Susan Schroeder said the GCA mission is to help preserve and protect Grand Canyon National Park by cultivating support through education and understanding of the park.

"The Grand Archaeology exhibit supports that mission by helping those who visit the show in Kolb Studio have a deeper understanding of the cultural history of the park," Schroeder said.