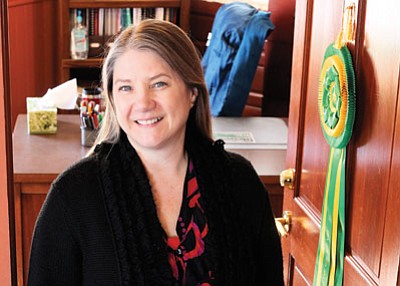 Ryan Williams/WGCN<br> Gioia Danesi-Goodrum, new Executive Director of the Williams-Grand Canyon Chamber of Commerce, gets settled in to her office.

WILLIAMS - Taking a handful of seemingly unrelated ingredients and combining them to make something sophisticated and, most importantly, delicious is a skill chefs learn to master to keep food lovers coming back to their table again and again.

Combining ideas about how best to market a small tourist community from a cross section of citizens and chamber of commerce members, and developing a marketing plan that brings visitors back to town time and time again, is likely a similar skill.

A good thing for Williams as it welcomes Gioia Danesi-Goodrum, a former five star French chef, as its newest Williams-Grand Canyon Chamber of Commerce Executive Director.

Not only is Danesi-Goodrum good in the kitchen, she's adept at developing marketing plans, something that will come into play immediately at the chamber. She has a history working in higher education having most recently worked at Yavapai College's Verde Valley campus as the Career Services Department Coordinator. She has extensive public relations experience as well.

Danesi-Goodrum began her duties with the chamber April 25 having relocated from Cottonwood with her husband. She said the transition has been painless largely due to the welcome she has received in town.

"It's been great and I have to say everyone here has been fabulous," she said. "So helpful and really accommodating and welcoming. I feel like I live here already."

When Danesi-Goodrum first read the job description for the Williams Chamber Director position she said she immediately thought the job sounded like a good fit and would even be fun.

She said she looks forward to using all of her skills and background in the position.

"I'm a pretty social person," she said. "I like to meet people. I like talking to people. I like making that connection. Of course, the whole creative piece with marketing is really exciting and interesting to me. I have that masters degree in business. I like to use that creativity. I was a chef and I have this really sort of left-brain, right brain thing happening. So, I like to use all of those skills that I have and this job gives me that opportunity."

Williams, and its charms, aren't unfamiliar to Danesi-Goodrum. As avid golfers, she and her husband visited Williams for years to take advantage of Elephant Rocks Golf Course.

Besides learning who is who and what is what around Williams, Danesi-Goodrum said she will initially begin working on goals as set forth by the chamber board.

"You know, the strategic plan is really important," she said. "Really, to start marketing the town. There is a lot that needs to be done."

Danesi-Goodrum added that her initial challenge will be getting Williams back in the forefront of potential visitors' minds.

"I'm behind other towns because there hasn't been anyone in the position," she said. "So, I think that is probably the biggest hurdle right now. We're starting a little late."

When it comes to Williams, Danesi-Goodrum said the town's diversity is likely its biggest strength. Marketing the town shouldn't be difficult.

"We have the train. We have Grand Canyon. We have Bearizona," she said. "We've got Route 66. We've got the ski area and the golf course. We have all of this diversity. It's almost a summer playground when you think about it."

Presenting Williams' strengths in a concise format is the key.

"I think there needs to be a targeting direction and strategic plan," Danesi-Goodrum said. "How are we going to market Williams? And, where are we going to do that marketing? Who are we going to look for? Vegas? Vegas is hot in the summer. Come on up here. It's a three to four hour drive. It's about that much to get people up from the Valley."

Just how good a "cook" is Danesi-Goodrum?

As Executive Chef and General Manager at Le Bocage Restaurant in Watertown, Mass., owned by her family, Danesi-Goodrum has cooked for connoisseurs of French cuisine - including Julia Child.

"She would come to our restaurant periodically because she really liked our food and she loved my father," she said.

Child was instrumental in convincing Danesi-Goodrum's father to allow her to study the fine art of cooking abroad. The story goes like this. Child came to the restaurant one evening shortly after Danesi-Goodrum had graduated college. While waiting on Child, Danesi-Goodrum asked where she should study cooking in the U.S.

"She said 'No, no, no my dear. You must go to Paris,'" Danesi-Goodrum said. "I said 'that's not going to happen. My father will never let me go."

Child took matters into her own hands, speaking with Danesi-Goodrum's father, eventually convincing him to let his daughter fly to Paris to study at La Varenne.