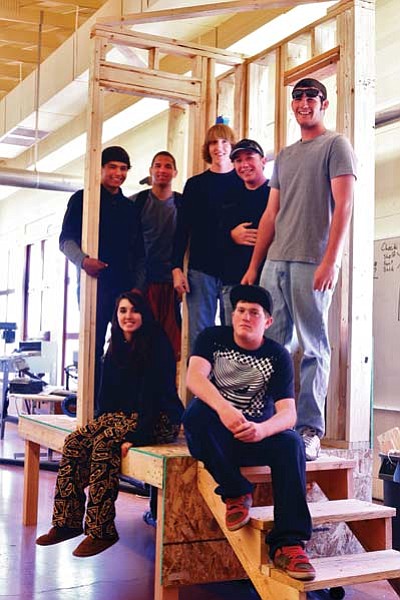 WILLIAMS - On April 19 and 20, students from Williams High School (WHS) put down their pens and protractors and picked up hammers and saws to compete in the 2011 SkillsUSA Arizona Championships.

The program is a partnership, "of students, teachers and industry working together to ensure America has a skilled work force," according to the SkillsUSA website.

The students came home with a fourth place under their tool belt for the Teamworks competition.

The Teamworks portion of the competition consists of four-person teams, competing in a combination event of carpentry, masonry, plumbing and electrical work. The WHS participants this year were Hunter Carlson, Wes Watson, Chase MacArthur and Trenton Lilly.

According to WHS construction teacher Sheldon White, students enrolled in his Skills USA program learn home maintenance skills, but he said his main goal is providing an opportunity for his students to learn skills that translate into a job.

"I think they did an excellent job of being competitive against the whole state," he said. "We competed in team build as we do every year. They did really well. Actually they were done a little early and they just missed some of the small details."

White went on to say competing against about 20 teams from all over the state was a challenge, but his students did very well against the odds.

"They are competing against vocational centers and 5A schools. For a little school of 200 kids to go up there and be competitive is pretty neat," he said.

The SkillsUSA team also had individuals competing in solo events.

Darius Brown, Dylan Mace and Jimmy Perkins competed in the electrical category. As of press time, no results were available.

Terry Fuller took on cabinet making, his first time ever competing in the category.

"Out of 22 teams he came in ninth place, so I thought that was pretty good," White said.

White went on to say that the first day of SkillsUSA is dedicated to professional skills, job interviews, speech and other skills.

"Then there are individual competition such as plumbing and electrical, welding, cosmetology, the whole gamut," he said. "Fire science, police science, the whole civic center was full of different competitions."

The second day is open to the public and is the performance portion, where all the building competition takes place.

"It is very loud. There are saws and hammers and welders and there is bodywork going on. It's a big building and it is just loud, lots of people," he said.

Along with competing in the state competition, students in the WHS construction program have also been learning valuable trade skills building sheds throughout the community.

White said individuals who purchase sheds pay for the materials, which the students will use to build the structure, and make a tax-deductible donation to the program.

Anyone interested in purchasing a shed can call the school to make an appointment with White at (928) 635-4474. He can also be reached via e-mail at swhite@wusd2.org.