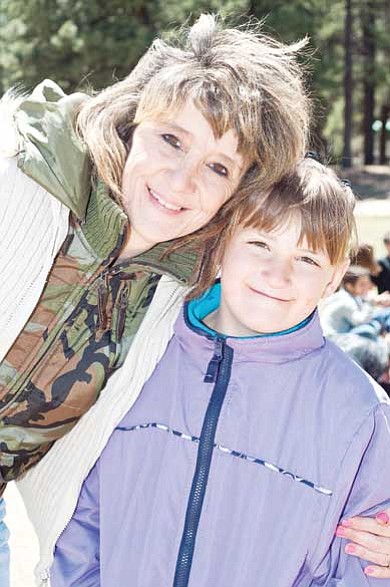 Submitted photo<br> Brenda, a Big, hangs out with her Little, Brandalyn.

WILLIAMS - Big Brothers Big Sisters of Flagstaff serves Williams through a program called School Based Mentoring. Bigs meet with Littles in first through fifth grade at Williams Elementary-Middle School. During their one-on-one time together, matches participate in recreational, health, and academic activities.

The Williams Unified School District in association with the Community Learning Center and the 21st Century Program of Williams helps Bigs and Littles meet weekly at the Littles' school. This can be done either after school from 4-6 p.m. or during the Littles lunchtime, which is referred to as Lunch Buddies Mentoring. Lunch Buddies allows the match to bond while eating lunch together, playing a game, or just talking.

There are currently a total of five School Based Mentoring matches in Williams, many which have been together for more than one year. Patricia, a current Big Sister in Williams, just had her three-year anniversary this past February with her Little, Jocelyn. Patricia said, "The structure of School Based Mentoring is very important to me and it has become an integral and wonderful part of my life. It always leaves me smiling. What I've come to appreciate about Jocelyn is how she has grown in her self-esteem, that she has become more outgoing, and she smiles more often."

Big Brothers Big Sisters of Flagstaff is a non-profit organization dedicated to helping children succeed by matching them with appropriate adult mentors. They help children realize their potential and build their future.

The non-profit organization believes that inherent in every child is the ability to succeed and thrive in life. Big Brothers Big Sisters of Flagstaff makes meaningful, monitored matches between adult volunteers ("Bigs") and children ("Littles"). Bigs hang out with their Littles for a couple of hours a few times a month and have fun enjoying life and building friendships. This consistent nurturing not only helps children but it strengthens our community.

The School Based Mentoring Program in Williams is in need of volunteers. In order to continue making meaningful matches in Williams, Big Brothers Big Sisters of Flagstaff needs Williams residents to get involved. By becoming a Big Brother or Big Sister, one person can make a huge difference. Children in Williams can learn, grow, and reach their full potential by having a Big in their life. As the children grow, so does the community.

"I am thrilled that our program in Williams is expanding. We have matches, as well as our Savers donation bin in Williams, which is quite successful. I already feel a good partnership with our city to the west and I am hopeful it will do nothing but grow and succeed," said Randi Rolle, executive director.

So how can people help? They can take a little action and "Start Something!" Start Something in Williams and encourage their friends to volunteer. Make clothing or financial donations to help support Big Brothers Big Sisters Mentoring Programs. But most of all, Be a Big! By becoming a Big Brother or Big Sister people are helping the youth grow in the community and succeed in the world.

Big Brothers Big Sisters has been in Flagstaff for over 43 years and is a well-established and well-respected organization. The organization helps children realize their potential and build their future. We nurture children and strengthen the community.

A 2009 study conducted by Harris Interactive on behalf of Big Brothers Big Sisters of America found that former Littles, now adults, who were matched for at least one year report that having a Big Brother or Big Sister played an integral role in who they are today by positively influencing their self-confidence, providing stability, changing their perspective on life and pushing them to set higher goals.