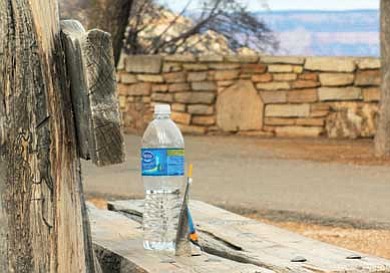 Ryan Williams/WGCN<br> Water bottles like the one left behind on a bench in front of Verkamp’s Visitor Center account for 30 percent of the solid waste stream at Grand Canyon National Park.

GRAND CANYON, Ariz. - Drinking enough water and staying hydrated is a big concern for those visiting Grand Canyon National Park. But, the prevalence of bottled water use has created another problem. Trash.

In an effort to cut down on the park's solid waste, the National Park Service began installation of nine re-usable water bottle filling stations, six located on the South Rim and three on the North Rim.

Tim Jarrell, chief of facilities management at the park, said the amount of disposable water bottle litter has not only been increasing along park trails and walkways on the rim but below the rim as well.

"It's one of the major contributors of trash below the rim, and it's currently estimated that disposable water bottles make up as much as 30 percent of the park's solid waste stream," Jarrell said.

According to Deputy Superintendent Barclay Trimble, the park's climate friendly initiative began about a year and a half ago.

"One of the things that we started pondering on was 'what can we do in the park that will benefit not only the park, but the country and the globe,'" Trimble said. "We started looking at a way to help reduce some of our solid waste stream that goes out of the park."

Along with environmental concerns regarding disposable bottles, the park service stands to save money devoted to waste management if there are less water bottle to dispose of, however, the savings are difficult to quantify.

"We could probably try to extrapolate something but it would be nothing more than a guess," Trimble said.

Filling stations will be located at Hermits Rest near other public amenities, Bright Angel and South Kaibab Trailheads and at Grand Canyon, Verkamp's and Desert View Visitor Centers.

The South Rim filling stations will all be equipped to provide year-round access to water. Officials with the park service anticipate they will be completed by the end of March.

These filling stations will be completed by the time the North Rim opens for the summer season May 15.

Signage at the filling stations will explain that all water available from the stations meets state standards. Trimble said visitors from other areas countries and even other regions of the United States may be hesitant to drink non-bottled water.

"We're trying to address that right at the beginning even at the signage right at the water stations," he said. "It's not even just other countries. I get comments from people from Phoenix saying 'I can't drink that water.'"

Water for the stations will be sourced from Roaring Spring located in the Canyon. One of the spigots at each station will be frost free for year round use.

Trimble said the park service is beginning to assess how reusable water bottle programs might be implemented on a national level. Zion National Park in Utah and Hawaii Volcanos have completely banned the sale of plastic water bottles within park boundaries.

"We haven't quite gotten that strong yet but it is something that the National Park Service is starting to look towards and at least is assessing how this can be done," Trimble said. "You have to have the right environments where it can be done reasonably and responsibly and provide visitors with the necessary water."

According to Trimble, concessionaires in the park are on board with the program as well. Despite the likely loss of revenue generated from the sale of water in disposable bottles.

"They have all been very willing to participate in this program just doing what's right," he said. "My sense is that there is a real possibility that the sale of reusable water bottles at various price points would help make up for the revenue decline that would happen when not selling bottled water."

"Being a park partner, we worked on a plan that included installing a water station in the store where guests could fill their water bottle for free," she said. "And we have a variety of water bottles available at different price points."

"There are a variety of bottles in our two locations," San Germano said.

"We've added, wherever possible at any of the water fountains throughout our facilities, we've added spigots so you can fill a refillable bottle," Streit said. "We also know it is important to have water available in many different forms and provide that service."

"By simply refilling a reusable water bottle, you can reduce litter in the park and plastics in the waste stream. At the same time, you can enjoy Grand Canyon spring water and save money. Our water is free to anyone who wants to refill their bottle."