Wind generator technology to be installed at Williams Elementary-Middle School
District officials hope one medium sized, 45-foot wind tower used to teach math and science will be installed before beginning of 2011-2012 school year 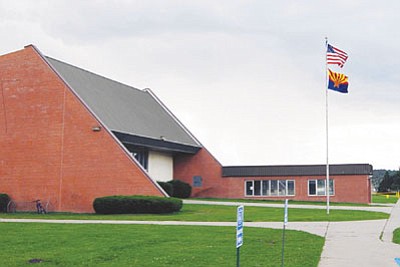 WILLIAMS - The Williams Unified School District (WUSD) not only offers students courses in the usual subjects like math science and english, it also offers a range of vocational classes including construction, engineering and culinary arts. The district hopes to offer wind energy curricula as soon as next fall.

With renewable energy rapidly becoming a viable technology, the time is right for local students to learn the ins and outs of the technology. One way to do that is to install a working wind generator at Williams Elementary-Middle School.

The Arizona Wind for Schools (AWS) program at Northern Arizona University will fund the wind turbine project. The program is funded through a grant from the U.S. Department of Energy.

"It is really going to enhance the science department and math department as well. It's really going to have an effect on both of Mike Fleishman, science teacher at Williams High School, said the funding will be used to construct one medium sized, 45-foot tall wind tower.

"They're not huge, but they are a wind generator," Fleishman said. "The concept here is let's get the students involved from day one in terms of here is what we do to plan for it, here is how we construct it. High school students can put this thing together."

WUSD students will construct the generator and attach the blades as well. Once the fabrication is complete, professionals will erect the tower.

"The primary purpose of this project is to learn about wind generation," Fleishman said. "Introduce it into the elementary grades. Then, combine it with the high school curriculum in terms of maintenance, analysis of energy, applications of this across the curriculum from math to science to GIS. I can plot how many wind days we have, what it looks like."

Fleishman said he envisions developing programs at the high school level focusing on building generators and turbines, skills likely to be in demand in the near future as renewable energy becomes more and more sought after.

Hudgens said he hopes to have the program in place at the start of the 2011-2012 school year.

"It doesn't do us any good to try to start a program using that kind of equipment at the end of this year," Hudgens said. "We want to start the school year with it."

Hudgens said an open meeting will be scheduled towards the end of the school year to explain the program to community members.

"We'll invite the community in to hear any comments," he said. "We're looking at doing this for educational purposes."

During their Nov. 10 regular meeting, members of the WUSD Governing Board approved the wind project.

In most cases, AWS only assists schools that have shown the available fundraising necessary to host a teachers' workshop or install a small wind turbine. However, in the case of the Williams Unified School District, they are able to offer both of these services at no cost due to a contribution from NextEra Energy resources, the company behind the Perrin Ranch Wind Farm project approved by the Coconino County Board of Supervisors in February.