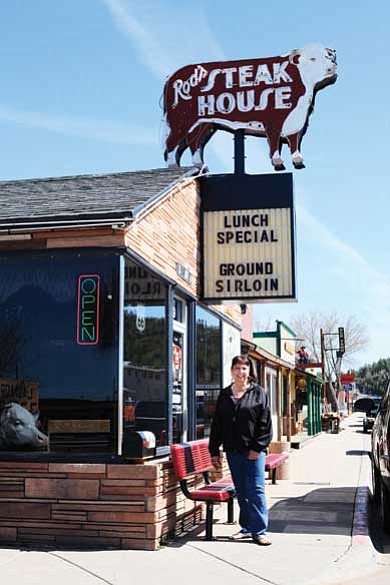 WILLIAMS - Local restaurant Rod's Steak House was named one of Arizona's 25 top restaurants in the April 2011 edition of Arizona Highways, adding to the restaurant's already prestigious list of achievements.

The magazine chose the steakhouse partially due to its iconic history as a Route 66 fixture, but also because of its consistent menu which, according to food critic Nikki Buchanan, has offered the same prime rib, steaks, beef liver and fried chicken to customers for the past 50 years.

Deciding to include Rod's in Arizona Highways was a simple process, Buchanan said.

"It has changed over the years, I've done this about four times now I guess and in the beginning they used to leave it almost explicitly up to me. But over time what happens is, people start writing letters and say, 'oh, we love that' or 'we can't believe you didn't include that'. We do pay attention to letters that we get from readers telling us about places," Buchanan said.

When it came to Rod's however, Buchanan personally chose the restaurant due her positive past experiences there.

"I did pick this restaurant and it is because, first of all, I remember going there years ago when my son was little when we were making a trip to Williams, so that was on my radar, and then we did a bunch of investigations on the internet to see if it was still good and if it was viable, that sort of thing," she said.

When Buchanan mentioned the restaurant during Arizona Highways final meeting on the top 25 list, she said Rod's fit perfectly into the list for many reasons.

"We had a meeting where we were going over the final list and make some decisions and when I said Rod's, our photographer jumped out of his seat and said 'Oh my god, I love that place, it was such a big deal to me as a kid, I loved the menu cut out and the big neon sign.' It hit for everyone. It had that really old Arizona feel to it, and we love that," she said.

When original owners Rodney and Helen Graves opened their doors to steak-hungry public on Aug. 23 1946, they created a main street institution and a familiar atmosphere, which as carried on for decades. That institution is something that current owners Stella and Lawrence Sanchez successfully reproduce today. Sanchez considers the nostalgic experience important for many of their customers.

"We have a lot of people that either came here on their honeymoon or with their children. Now, they are here as adults and their children have their own children and they find it very interesting to see that the restaurant is here because it is a very tough business," she said. "Customers say, well it just looks the same, and we have tried really hard to keep it the same because of that reason. People come and they remember that."

The visitors also remember the registered trademark menu, die-cut in the shape of a steer, a reproduction of which the restaurant still uses today. The menu and has become somewhat of a souvenir for many, with Sanchez saying they even sometimes get their old menus in the mail, found after decades of sitting in a drawer or in a souvenir trunk by past customers.

"That is pretty nice, and we put them a lot of them on display around the restaurant," Sanchez said. "People also bring back their old menu, and of course the steaks today are priced quite different, but they say, 'if I give you back this menu, can we get the steaks for the $2.50 price it says on there?'"

Though Sanchez was aware that the restaurant was chosen for the Arizona Highways article, she remains proud of the privilege, mentioning even the photographer had experienced Rod's as a child.

"We knew of course that it was coming, because a very nice gentleman was here from the magazine who also was brought here by his parents as a youngster. He said that he had remembered eating here and the food was always excellent and that night ate here again and was very happy with his food," she said.

Inclusion in Arizona Highways was not the first time Rod's has been recognized. In 1999, Rod's Steak House was inducted into the Arizona Restaurant Hall of Fame.

"It was a great honor. When we went to the celebration, everyone treated you like a queen and a king. That is a great accomplishment that we are very proud of," Sanchez said, adding that Food Network's Extreme Cuisine also featured their charred steak in the past, generating new customers.

"That was really cool to actually see that on T.V., a man came in last week told me that he had remembered seeing it, and was coming here, so made a reservation," she said.