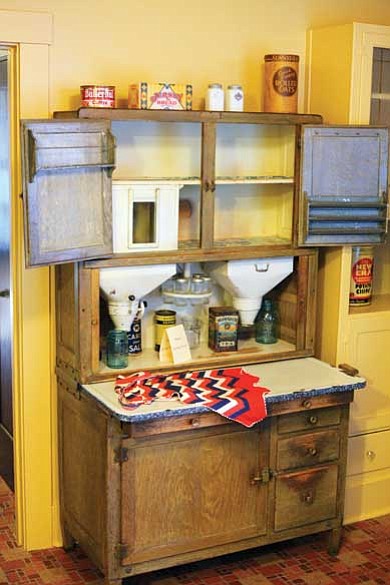 Ryan Williams/WGCN<br> A Hoosier Cabinet Silver Edition, circa 1900, sits in the kitchen once used by the Kolb brothers.

GRAND CANYON, Ariz. - How many of the Grand Canyon's 5 million yearly visitors experience a sunrise peering through the window of a home built precariously on the edge of the South Rim?

A handful at the most, which is one of the reasons local resident Bill Brookins counts himself fortunate to be one of the few.

Natives to Philadelphia, the Kolb brothers, Ellsworth and Emery, decided to make the Grand Canyon their home in 1902, 17 years before the establishment of Grand Canyon National Park. Avid photographers and river rafters, the Kolbs were the first to document a boat trip down the Colorado River with a movie camera, shown to park visitors from 1915 until 1956, making it the longest film showing in history. The 35mm projector used is available to view in the gift shop.

The Kolb brothers were passionate about photography, and the majority of their photos were sold to visitors meandering up the Bright Angel Trail on the backs of mules. According to Brookins, developing film was a journey in itself.

"When they were doing their photos up here, they didn't have any access to fresh water. It wasn't a park yet, and the person that had control over the water was Fred Harvey," he said. "The Kolb brothers weren't going to give anything to him since they were in competition with each other, so what they would do is take the pictures of people riding the mules down the trail, and then they would take the negatives in glass plates, put them in a back pack and run down to the only available source for fresh water. It was four and a half miles down and four and a half miles back up. That's a long way. And Emery must have done that a couple times a day."

Walking into the sitting room, Brookins brought out reproductions of photo scenes from their famous movie, 'Floating Down The River,' as well as actual furniture owned by the family.

"Emery Kolb had all sorts of interesting guests - John Muir, Albert Einstein the list goes on and on," he said. "I like to sit in here and think about, 'Well geez, what were they talking about or what did they have for dinner,' my little pea brain just goes crazy thinking about all those folks that were in here."

Heading into what could only be described as a sun porch, it is hard not to notice how startlingly close the structure is to the edge. Only a period window separates visitors from the bottom of the Colorado River. There, the brothers watched the stars and wildlife from the comfort of their brown wicker chairs.

"Can you imagine just sitting here every day, and looking out here? To take in the full experience here you just have to sit and relax and just take it all in," Brookins said. "The longer you sit here, the more you will notice things. During the summer there is always some kind of wildlife walking by, whether it is a deer of a bobcat, it is like a Disney moment."

Just sitting in silence is spectacular. The majesty of the Canyon changes every time you look, Brookins said.

Sitting so close to the edge is an incredible feeling, and Brookins added how difficult it is to imagine how people lived in the building prior to its structural stability assessment.

"When the Grand Canyon Association (GCA) decided to restore the building, they hired a structural engineer, he came down here and said, 'Well, the first thing you need to do is to attach the building to the wall,'" Brookins said.

Leaving the sun porch and stepping into the kitchen, the eye first lands on the brothers' Hoosier kitchen cabinet, which Brookins said has a unique story.

"The GCA got this cabinet back when Helen (Ranney, director of outreach and public relations, Grand Canyon Association) was trekking in Nepal," Brookins said. "They were talking to a park ranger who used to be at the Canyon and he said, 'Hey, I've got this Hoosier kitchen cabinet that I bought after Emery died. It is just sitting in my garage.'"

Donated to the GCA and restored, the cabinet sits prominently upright in the small kitchen, complete with a flour shifter and sugar bin built inside, which makes it an upgraded model according to Brookins.

"There is a packing list on each one of the pieces that says 'Ship to Mrs. Emery C. Kolb, Box 12, Grand Canyon,' so that makes it priceless," he said.

Traveling down into the dark room, which still holds the lingering smell of chemicals, Emery Kolb's hand-made photography stands and fascinating make shift tools still reside, which at one time helped to generate the photos that are famous in the park today.

"He made all of this, he didn't go to Wal-mart and buy any of it," Brookins said.

Kolb Studio is just one example of history sitting in the shadows of the Grand Canyon, and the people who helped shape its future.

"The more time you spend here, the more you see it isn't just all about the Canyon," Brookins said.

For more information on Kolb Studio and its rotating exhibits, visit www.grandcanyon.org.