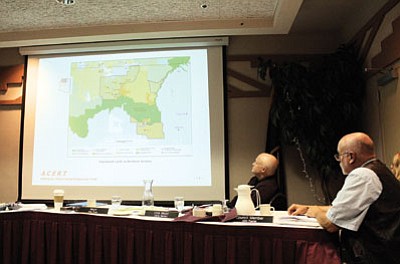 GRAND CANYON, Ariz. - Depending on how you look at it, the Grand Canyon and the area surrounding it is a natural wonder to be preserved, enjoyed and protected - or it's a gold mine.

Actually, a uranium mine.

The release by the Department of Interior on Feb. 17 of a Draft Environmental Impact Statement (Draft EIS) on uranium mining around the Grand Canyon has prompted groups for and against the idea to launch campaigns to encourage the public to make their opinions known during a short 45-day commenting period. Comments must be submitted by April 4.

The Draft EIS includes four possible actions, one of which would remove 1 million acres from new mining claims. Something the Grand Canyon Trust organization stands behind.

Speaking at the March 2 Tusayan Town Council meeting, Roger Clark, energy program director with the Grand Canyon Trust said mining near the Canyon will be destructive, requiring 360 million gallons of water to be pumped from the ground just to operate prospective mines.

"That is a large footprint of disturbance," Clark said. "There are 15 hundred acres, that is a little more than two square miles. Cumulatively, that is a large amount of industrialization that is occurring around the Grand Canyon."

Water supply uranium contamination is also a major concern for Clark and the Grand Canyon Trust.

Patch Karr, owner of Barbie Drilling, Inc., said he has been involved in exploratory drilling operations on the north and south sides of the Grand Canyon and hasn't seen anything that indicates uranium mining will contaminate the Canyon.

"I was very concerned about the uranium at first," he said. "I live just south of the Canyon on Highway 64 and if there was a chance that something would go wrong or this operation would damage the Canyon, I'd be the first one to stand up and say 'no' and it's just not there," he said.

Pamela Hill with the American Clean Energy Resources Trust (ACERT), a coalition of uranium exploration and mining companies hoping to do business in northern Arizona, said from start to finish a single mining claim operation exists for approximately eight years before the area is reclaimed.

Hill said uranium mines around the Grand Canyon are dry.

"This is high desert," she said. "There is no water. There is hardly any water in these mines. We normally have to truck in water to the mine site to help drill and keep down dust and all that."

Hill said uranium ore is generally located 1,000 feet above any aquifers in the area.

"There is no intermingling between these ore bodies and the aquifers," she said.

Clark said along with environmental concerns, mining operations have no direct economic impact on the region.

"It doesn't produce obvious changes in economic conditions to the residents of local and regional communities," he said. "That's because most of the jobs are temporary."

Information provided by ACERT paints a different picture, contending that 1,078 new, full-time jobs will be created if mining in Coconino and Mohave counties, along with Kane, Washington, Garfield and San Juan counties in Utah is allowed.

Secretary of the Interior Ken Salazar withdrew close to one million acres of federal land in the Arizona Strip and Kaibab National Forest for two years in 2009. He said the move was intended to allow time to gather scientific data regarding uranium mining in the area and to gather public input.

Public input on the Draft EIS will be used to inform a final decision made by the Secretary of the Interior on the proposed withdrawal.

A public meeting on the Draft EIS will be held today at 6 p.m. at Fredonia High School, Media Center, 221 East Hortt Street, Fredonia.