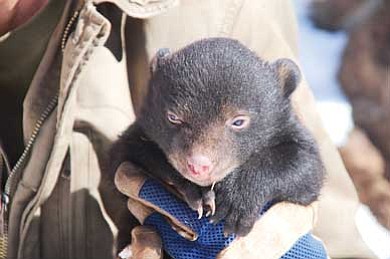 Submitted photo<br> Bear cub “Doc,” born sometime in January, is the most recent arrival at Bearizona.

WILLIAMS - Bearizona announced the arrival of the first cub ever to be born at Bearizona Wildlife Park in Williams on March 8. The cub was named "Doc" in honor of Doc Casey, CEO Sean Casey's late father.

"Doc" was born in the middle of January, as was Sean's father, and removed from the den on Feb. 28. Doc will join another cub rescued from Missouri earlier this month. The two will play together all summer in Fort Bearizona, the walking portion of the park.

Currently, Doc and his buddy the Missouri bear "Itty" are on exhibit in the gift shop for visitors to get an up-close look before they will move into their own exhibit later in the season.

"The cubs grow up fast and will outgrow their gift shop exhibit quickly so visitors who want to get this special up-close look should plan their visit as soon as possible," said Casey. He anticipates the cubs will move into their own exhibit sometime in April.

With spring break approaching, the bear cubs give visitors one more reason to add a Bearizona adventure to their spring break plans. Bearizona is located a half hour west of Flagstaff and only two hours northwest of Phoenix.

Bearizona opened for the 2011 season March 1 and is open every day of the week. Bearizona entertained over 90,000 visitors in 2010 and expects that number to increase significantly this year. The park is thankful to the city of Williams and all of Arizona for their support.

Bearizona has over 2,700 fans on their Facebook page www.facebook.com/bearizona and posts park updates and pictures regularly on Facebook.