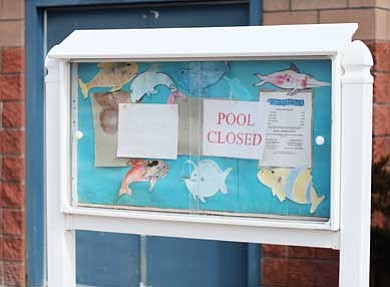 Ryan Williams/WGCN<br> The Williams Aquatic Center will reopen for the summer months beginning in May.

WILLIAMS- Swimming through a sea of operation costs and revenue figures, the city of Williams successfully included summer use of the Williams Aquatic Center into their 2011 budget.

Pool doors will open to the public May 1, allowing students to swim during their vacation, which currently is the only realistic usage option for the center, according to Interim City Manager Joe Duffy.

"Operating the pool year round costs about $20,000 per month. Due to a significant decrease in sales tax and state shared revenues, the city was forced to close the aquatic center," he said. "Operating costs are cheaper during the summer because we can operate it as an enclosed outdoor pool, and not have the added expense of operating the PoolPak."

"PoolPak" is the brand name of the large heating, ventilating and air conditioning unit on the pool's north side that handles the atmosphere in the building, explained the city's recreation director, Rose Newbold. The unit provides heat for the pool structure.

"Without it, the metal building cannot be heated. During the summer when the weather is warmer we achieve the pool building atmospheric changes necessary by opening and closing the bay doors and north side windows," Newbold said.

This solution has made it possible to open the pool over the summer, even though the cost of keeping the center open year-round has become a near impossible goal.

But, Friends of Williams Aquatic Center President Mike Dulay said they have not given up yet. The group is still seeking out grant funds and engineering help to aid pool operation.

"Before it was 'save the pool.' Well, the pool is saved. That is no longer the issue, the issue is how do we keep it open and that is a much more complicated thing," Dulay said. "There has to be something cheaper out there and (the city) put it to us to try and find it, so our current goal right now is to try and find inexpensive engineering work. We are hoping that someone at Northern Arizona University can help."

He went on to say fundraising has also been steady, but the ultimate goal of keeping the pool open has been modified.

"Overall we are doing fairly well. Financially, the profits are nice and stable, the people are still there and the money is still there," Dulay said. "The problem is that the first hurdle is so high. It's not like we have $2,000 or $5,000 to contribute to help the pool run more efficiently, our first hurdle is $15,000 which is up there."

After scaling back the tremendous task of fundraising enough money for the pool to remain open permanently, Dulay said money raised by Friends of the Aquatic Center would instead help fund pool programs during the months the pool is in use.

"We want the pool open, we want to swim, we want longer hours, and we would like to not have the city charge everyone super high rates," Dulay said. "But on the other hand, the prices have to go up and I realize that and I believe the community realizes that. The fact that they are supporting us means that we are able to pay more, but there is the issue of how much."

The total cost to keep the pool open this coming summer is $72,870, which is paid by user fees and general fund revenues. A large chunk of the sum is funding the personnel, which totals at around $60,000, according to Duffy.