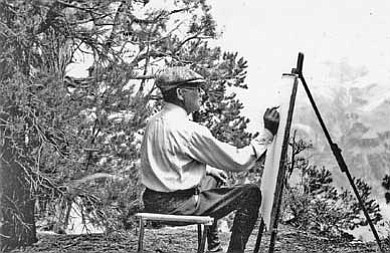 Photo courtesy of Alan Petersen<br> Swedish born artist Gunnar Widforss works on the South Rim of the Grand Canyon. Widforss lived and worked at the Canyon beginning near the end of the 1920s until his death in 1934.

GRAND CANYON, Ariz. - Ever since the first glimpse of the Grand Canyon, attempts have been made to capture its immensity and grandeur in a variety of art forms from painting to photography.

Although not widely known, Stockholm-born painter Gunnar Widforss is considered by many to be one of the best artists to paint the American West and the Grand Canyon.

Widforss will be the subject of a presentation by Alan Petersen March 9 sponsored by the Grand Canyon Association. The event will take place at the Shrine of Ages at 7:30 p.m. Petersen, who has presented on art in the Colorado Plateau and curated the Widforss exhibit at the Museum of Northern Arizona last year, previously presented the lecture in Flagstaff and Prescott.

"I think it is really going to be interesting for the public," Ranney said. "He was an interesting character."

According to Petersen, Widforss visited the Grand Canyon for the first time in 1922. By the end of the 1920s, Widforss spent most of his time there, calling the South Rim his home until his death in 1934 at the age of 55.

"He made it his most permanent home," Petersen said. "He was kind of an itinerant, bohemian kind of fellow."

Widforss, who painted primarily with watercolors, never became as well known as he might otherwise have, likely due to the stock market crash of 1929.

"His personality and history kind of conspired against him," Petersen said. "He was an extremely dedicated artist but he also probably wasn't the best business person as an artist, which is pretty typical. Right as he was really beginning to gain attention, especially in the west, there was the big stock market crash and that just kind of really hurt his sales and as a result, later knowledge of him."

Widforss' painting style is very realistic, a challenge when painting with watercolors. Petersen said he was able to instill the spirit of the places he painted into his works.

"With some realistic artwork, artists lose sight of the spirit. They concentrate so much on the image and the formal aspects of it," Petersen said. "So, he was really gifted in being able to convey a sense of his subject."

While Petersen's presentation will be held the same night as the opening of the Arts for Our Park student exhibit at Kolb Studio, Ranney said this provides an opportunity for art lovers to take part in a full evening of art viewing - a Grand Canyon Village art walk.

"I thought about what I was doing double booking but, I talked to the school and the Arts for Our Park committee and we felt this was all about art," Ranney said. "So, it's kind of nice. People could do both."

Widforss is buried in the Grand Canyon Cemetery adjacent to Shrine of Ages.