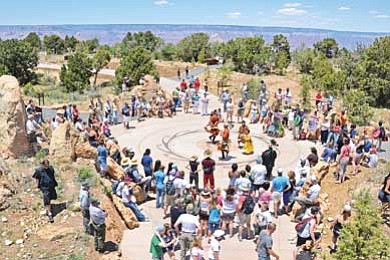 Photo/NPS<br> The Pollen Trail Dancers perform a traditional dance at the Landmark and Tribal Medallion near Mather Point during a celebration held June 15 to commemorate improvements at Mather Point and the Grand Canyon Visitor Center area.

GRAND CANYON, Ariz. - On Wednesday, June 15, Grand Canyon National Park celebrated the completion of two years of improvements to the Mather Point and Grand Canyon Visitor Center area, and hundreds showed up to join in the celebration.

The event took place from 11 a.m. to 2 p.m. and began with a celebratory gathering at the new Mather Point Amphitheater.

Following the celebratory gathering, an outdoor open house began and continued until 2 p.m. Information stations were available at key locations throughout the area and featured posters with before, during and after photos of the improvements. In addition, participants were treated to Native American dance performances, a special ranger program, showings of the park's new interpretive orientation film, photo opportunities with the park's mounted rangers, cake and activities just for kids.

The improvements, called for in the 2008 South Rim Visitor Transportation Plan, addressed many of the South Rim's most significant traffic congestion and parking issues and improved the experience of park visitors by:

• increasing access and parking at the Grand Canyon Visitor Center,

• creating a rim side amphitheater and access for the mobility impaired at Mather Point,

• adding a theater and developing an orientation film for the park's main visitor center,

• building a centralized shuttle bus transit area at the Visitor Center plaza, and

• adding interpretive elements to the plaza and along the walk to Mather Point that increase opportunities for visitors to learn about and connect to the cultural and natural history of the Grand Canyon.

To learn more about planning a trip to Grand Canyon National Park, please visit the park's web site at www.nps.gov/grca or call 928-638-7888.