Fireworks on the Fourth in Williams?
Decision to ignite fireworks to be made by Williams city officials at noon on Monday 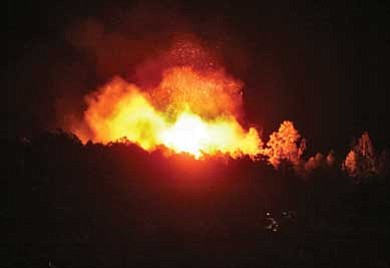 WILLIAMS, Ariz. - Williams knows how to put on a great party, giving residents and visitors alike plenty of reasons to celebrate our Nation's independence.

While organizers hope to bring back a fireworks display for the culmination of this year's celebration, whether any rockets are shot skyward remains to be seen.

"We'll see what the weather conditions are and talk to the Forest Service and determine if it's prudent to have fireworks or not," Duffy said. "Hopefully, we can do it. It looks like there is some forecast for moisture. As of today, we're cautiously optimistic."

The last time Williams' Fourth of July celebration featured a fireworks display was in 2007 when a sudden fire broke out. Dubbed the "Fourth Fire," the 0.6-acre blaze occurred in an area directly north of the city's wastewater treatment plant near the Flat Rock region.

Come out to one of the largest parades in Arizona beginning at 4 p.m. Monday along Route 66. Parade goers can expect to see antique tractors and vehicles, animals, children riding decorated bicycles, politicians and more.

But the fun doesn't end with the last float to pass by. Following the parade, head over to the Williams Rodeo Grounds where a good old-fashioned hoedown will be held in the barn. There will be a $5 charge per vehicle to park.

Chow down on hamburgers and hot dogs prepared by the Williams Rotary Club while waiting for the fireworks display to be held at dusk. The Williams Volunteer Fire Department will shoot off the fireworks if weather conditions permit. Williams has not had fireworks since 2007 when a sudden fire broke out. Dubbed the "Fourth Fire," the 0.6-acre blaze occurred in an area directly north of the city's wastewater treatment plant near the Flat Rock region.

Battle of the Barbecue

Yummy, messy barbecue is back this upcoming Fourth of July weekend. After a successful professional barbecue competition last year, organizers are turning up the heat on the Second Annual Northern Arizona Barbeque Festival.

Teams will begin arriving in Williams on Friday, July 1 for the state competition. This year's event features an opening night party that evening at 6 p.m.

The fun starts at 10 a.m. with beer, barbecue and bands on tap. At 2 p.m., Irish band The Knockabouts will be playing. Then during the evening, local band Rewired Madness will take over the party. Route 66 Catering and Satchmo's from Flagstaff will provide barbecue meals for the public.

New to the event this year will be the Backyard Barbecue Throwdown, which will be held on Sunday.

Judges will be selected out of the audience to judge a burger, chicken and cook's choice competition.

"I know Camp Civitan said they would be doing the event and they want to challenge all other organizations to get involved," Vaughn said. "They want to throw down the challenge to see who has the best barbecue chefs out there."

The Sunday competition is all about having a good time. Organizers look forward to see locals participating in the event, during which time local band The Sweet Lemon will provide musical entertainment.

Event organizers are still looking for volunteers and sponsors. Volunteers will receive a free t-shirt. Please contact (928) 635-1418 for more information. To find out more about the event, visit www.NAzBBQ.com.

Gun blasts from the past

Blazing guns will gleam in the sunlight when the Railhead Shooting competition returns tomorrow through Sunday. The competition is held at the shooting range north of Williams on Highway 64.

Last year, over 160 people turned out for the Railhead Shooting competition over the long Fourth of July weekend. Participants in Railhead operate under an alias. They are also expected to dress in full 1800s period clothing. The Phoenix-based Cowboy Shooters Association sponsors the competition. Contestants dress in attire from the 1890s or older. The firearms used in the Railhead competition vary widely and are dependent on the type of shooting event each competitor participates in. The public is welcome to watch the shooting competition. Admission is free for spectators. Hearing and eye protection are mandatory on the range.

The Northern Arizona Antique Tractor and Engine Association is returning and will display their tractors on South Second Street Friday, Saturday, Sunday and Monday. The tractors will also appear in the "Red, White and Boom" parade.

The Community United Methodist Church will also host their traditional ice cream social Monday at 1 p.m. While ice cream will not be served prior to 1 p.m., it is recommended that connoisseurs arrive shortly thereafter to guarantee a taste of genuine, homemade, smooth and chilly ice cream. Donations are requested and proceeds assist the Williams Ministerial Association.

Everyone is invited to share in the 10th annual Fourth of July community prayer held at the Visitors Center beginning at 9:30 a.m. with music provided by Lance Beavers and his sons. At 10 a.m., speakers will be present, along with Support our Troops representatives. The prayer honors those who are serving or have served our country. Chairs will be provided.

Saturday and Sunday, the public will have the opportunity to ride the rails via the Cataract Creek Rambler Steam Train. Fueled by waste vegetable oil (WVO), Grand Canyon Railway is taking steam power into the 21st century while preserving historic trains and the environment. The locomotives will be powered with WVO, making hourly short-run departures from Williams. The train will travel 16 miles round-trip for a special price. No advance reservations are available. Tickets will be sold at the Williams Depot. For more information, call (800) THE-TRAIN or visit TheTrain.com.

For more information on Williams' July 4 events, contact the Williams-Grand Canyon Chamber of Commerce at (928) 635-0273.