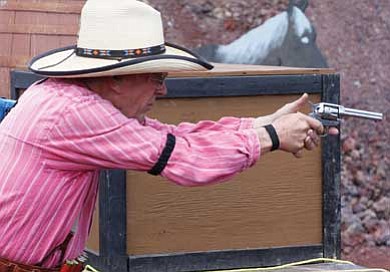 Great tasting barbecue is back this upcoming Fourth of July weekend. After a successful professional barbecue competition last year, organizers are turning up the heat on the Second Annual Northern Arizona Barbeque Festival.

Teams will begin arriving in Williams on Friday, July 1 for the state competition. This year's event features an opening night party that evening at 6 p.m.

Route 66 Catering and Satchmo's from Flagstaff will provide barbecue meals at the party.

"We're pushing really hard to get 40 teams," Vaughn said. "Saturday at 10 a.m. the gates open and everything will be in full swing. Beer, barbecue and bands will be on tap. At 2 p.m. the Knockabouts will be playing and Saturday night, local band Rewired Madness, who has played on Whiskey Row among other places, will be playing."

New to the event this year will be the Backyard Barbecue Throwdown held on Sunday.

Vaughn said local teams will set up at 9 a.m. with judging taking place at 12 p.m. An entry fee of $20 per team will go to the Special Olympics.

Last year our event brought in over $20,000 in local funds and around $14,000 that went to vendors. This year we will holding on to a lot more of that $14,000 so we should raise good money for Special Olympics along with Williams Main Street.

"We'll pull judges out of the audience," he said. "There will be a burger competition, a chicken competition and then if you want, a cooks choice. We're going to even allow grills. Not everybody can afford a $4,000 smoker."

The Sunday competition is all about fun. Organizers hope to see many locals participating in the throwdown.

Local band The Sweet Lemon will provide musical entertainment during the throwdown.

Event organizers are still looking for volunteers and sponsors. Please contact (928) 635-1418 for more information. To find out more about the event, visit www.NAzBBQ.com.

Blazing guns will gleam in the sunlight when the Railhead Shooting competition returns tomorrow through Sunday. The competition is held at the shooting range north of Williams on Highway 64.

Last year, over 160 people turned out for the Railhead Shooting competition over the long Fourth of July weekend. Participants in Railhead operate under an alias. They are also expected to dress in full 1800s period clothing. The competition is sponsored by the Phoenix-based Cowboy

Contestants dress in attire from the 1890s or older. The firearms used in the Railhead competition vary widely and are dependent on the type of shooting event each competitor participates in. The public is welcome to watch the shooting competition. Admission is free for spectators.

"Hearing and eye protection is mandatory on the range," Denzin said.

The Northern Arizona Antique Tractor and Engine Association is returning and will display their tractors on South Second Street Friday, Saturday and Sunday. The tractors will also appear in the parade.

The Community United Methodist Church will also host their traditional ice cream social Monday at 1 p.m. While ice cream will not be served prior to 1 p.m., it is recommended that connoisseurs arrive shortly thereafter to guarantee a taste of genuine, homemade, smooth and chilly ice cream. Donations are requested and proceeds assist the Williams Ministerial Association.

One of the largest parades in Arizona begins at 4 p.m. Monday along Route 66. Parade goers can expect to see antique tractors and vehicles, animals, children riding decorated bicycles politicians and more.

Following the parade, head over to the Williams Rodeo Grounds where a good old-fashioned hoedown will be held in the barn. Enjoy hamburgers and hot dogs prepared by the Williams Rotary Club while waiting for the fireworks display. The fireworks will be shot off by the Williams Volunteer Fire Department north of Interstate 40 if weather conditions permit.

And, Saturday and Sunday, everyone will have the opportunity to ride the rails via steam. Fueled by waste vegetable oil (WVO), Grand Canyon Railway is taking steam power into the 21st century while preserving historic trains and the environment. The locomotives will be powered with WVO, making hourly short-run departures from Williams. The train will travel eight roundtrip miles for a special price. No advance reservations are available. Tickets will be sold onsite. For more information, call (800) THE-TRAIN or visit TheTrain.com.

For more information on Williams' July 4 events, contact the Williams-Grand Canyon Chamber of Commerce at (928) 635-0273.