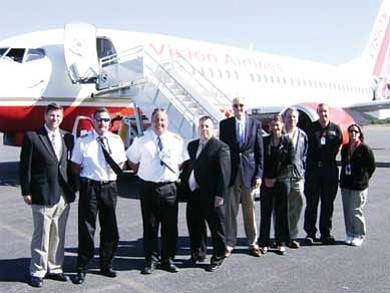 GRAND CANYON, Ariz. - The first full passenger flight aboard a Vision Airlines 737 touched down at the Grand Canyon National Park Airport on June 13, marking the official start of 737 airline service to the airport.

Vision Airlines, which operates out of Las Vegas, is now offering 737 service to the airport on a daily basis. The Transportation Security Administration is also stationed at the airport and will be screening passengers as they board the plane to fly back to Las Vegas, along with assisting with other homeland security measures at the airport. The Arizona Department of Transportation operates the Grand Canyon Airport.

"Now that Vision has airline service here, people who want to visit the Grand Canyon from anywhere in the country can fly to Las Vegas, switch planes and come to the canyon," said Grand Canyon Airport Manager Michael Halpin. "They can make a visit to the Grand Canyon a part of their Vegas weekend getaway."

This development is the first step in making the Grand Canyon more accessible to people around the state and around the country. With the addition of TSA officers, charter flight companies will no longer have to provide their own passenger screening. Also, the use of 737 airliners means airline companies can fly more people to the Grand Canyon at a reduced cost.

"Our goal is to give people more options to come see the Grand Canyon," Halpin said. "We think once other airlines see that they can fly 737s to the Grand Canyon, they may start offering similar services to their customers."

Officials from ADOT, the Transportation Security Administration and pilots from Vision Airlines at the first full-passenger 737 landing at Grand Canyon National Park Airport