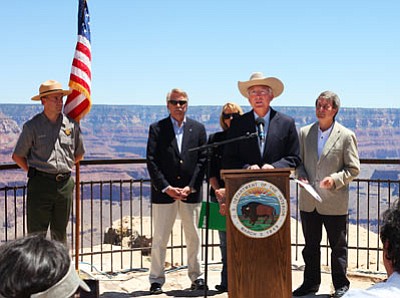 GRAND CANYON, Ariz. - Against the scenic backdrop of the Grand Canyon South Rim at Mather Point, Secretary of the Interior Ken Salazar announced June 20 his decision to extend the withdrawal of one million acres of land adjacent to the Grand Canyon from uranium mining until Dec. 20.

The proposed Draft Environmental Impact Statement (Draft EIS) outlines a 20-year mineral withdrawal subject to existing rights. Public input on the Draft EIS was sought to inform a final decision made by the Secretary of the Interior on the proposed withdrawal and, according to Salazar, the BLM received nearly 300,000 comments during the open comment period.

Responding to the public input, the BLM will identify a preferred alternative for a final environmental impact statement, which will be completed in the fall.

"At this moment we face a choice," Salazar said. "We face a choice which could profoundly affect the Grand Canyon in ways that we do not yet understand."

Based on the input from BLM Director Bob Abbey, NPS director John Jarvis, USGS Director Marcia McNutt and the USFS Chief Tom Kidwell, Salazar directed the BLM to identify the full withdrawal as the preferred alternative in their final report.

"This alternative, if ultimately selected, will insure that all lands adjacent to the Grand Canyon National Park are protected from new hard rock mining land claims, all of which are in the watershed of the Grand Canyon."

A two-year moratorium on new claims in the area has been in effect since July of 2009. When Salazar withdrew close to one million acres of federal land in the Arizona Strip and Kaibab National Forest he said the move was intended to allow time to gather scientific data regarding uranium mining in the area and to gather public input.

Salazar said the decision regarding new claims remains an ongoing process. Based on Salazar's direction and future analysis, the BLM will complete a final EIS at which point he will be able to make a final decision on the 20-year mineral withdrawal.

Salazar added he expects critics to say that a full withdrawal denies access to uranium mining.

"That of course is not true," he said. "Uranium, like oil and gas, or solar, wind, geothermal or other renewable resources, remain a vital component of a responsible and comprehensive energy plan for our nation and we will continue to develop uranium in northern Arizona, Wyoming and other places in the country."

After Salazar spoke, Abbey went on to explain without additional science and analysis, the BLM, USGS, NPS and NFS is unable to assess possible risks and to adequately protect the Grand Canyon, surrounding lands and the ground water that is relied upon downstream by users of major populated areas in the western United States.

Abbey said mining is a central component of the BLM's multiple use mandate.

"However, multiple use does not mean, every acre managed by the BLM is appropriate for every use," he added. "Mining is an important part of the United States energy strategy and acknowledged the potential for uranium development."

USGS Director McNutt then said since the early 1950's, uranium mining has extracted a total of about a half-year's worth of uranium consumption given the current rate at which the U.S. consumes this resource.

"Our best estimate of the in-ground resources is that it would meet domestic needs for about six years given our current rate of consumption," she said, adding the resources around Grand Canyon amount to 12 percent of the total uranium resource in northern Arizona.

USGS also considered the impact uranium mining of water quality and the remobilization of contaminants, of which the least is known due to little monitoring of active mines in the past.

"People like John Wesley Powell, Theodore Roosevelt and Steven Mather helped us choose the protection of the ancient over the pressures of the now," Salazar said.

Salazar went on to say 3.5 million dollars is generated in hunting, fishing, recreation, and tourism in the Grand Canyon alone. Along with the economic factors, the Canyon also provides water, jobs and cultural heritage.

Salazar said some of the lands near the Grand Canyon historically contributed to the United States uranium supply.