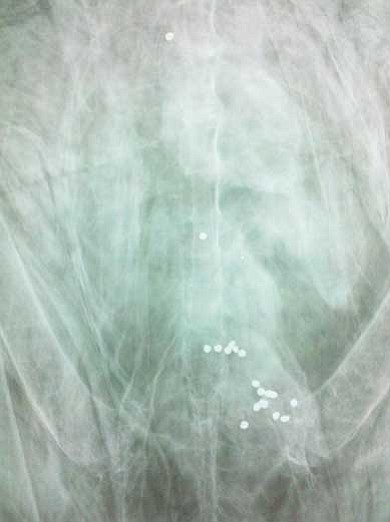 Photo: Chris Parish/The Peregrine Fund<br> The digestive system of a California condor found dead by a hiker in the Grand Canyon contains 18 lead shotgun pellets, as shown in this x-ray. The condor consumed the pellets while scavenging an animal carcass that had been shot with lead ammunition.

Tests indicated that a total of six California condors had toxic levels of lead in their bodies in early May. Three of the birds died of lead poisoning. The other three were successfully treated and released back into the wild.

Necropsies were conducted by the San Diego Zoo's Institute for Conservation Research.

"X-rays showed 18 shotgun pellets in the digestive system of one bird and six in another," he said. "The third had remains of a spent bullet in its system, all suggesting these scavengers died after eating one or more animal carcasses that had been shot."

Biologists were alerted to the most recent poisoning incident by a Grand Canyon hiker who reported seeing a dead condor. Biologists recovered the bird, an 11-year-old male that had been nesting in the area.

"The loss of this older condor is especially harmful to the recovery of the species because of its potential to add to the population as a breeding bird," Parish said. "While the Arizona program is experiencing some positive milestones, like the new chick that recently hatched in the wild, the availability of lead to condors continues to hamper the program."

After receiving the hiker's report, Peregrine Fund biologists immediately began capturing other condors known to have been in the same area to try to determine the cause of death. Of nearly 30 birds captured and tested, five had toxic blood lead levels that required treatment and two died, in addition to the bird found by the hiker. The other three birds were released back into the wild after chelation treatment, a process used to remove lead from the birds' systems.

"If the hiker hadn't found the dead bird and reported it, this exposure event might have slipped under our radar and the population could have suffered the loss of even more birds," Parish said. "Annual exposures tend to follow the big-game hunting seasons, but this episode shows that it can happen anytime. Condors are scavengers and if carcasses or discarded remains are left in the field, they will consume them."

Since 2005, the Arizona Game and Fish Department has been working with hunters in the condors' core range of northern Arizona to voluntarily use non-lead ammunition. The effort has resulted in up to 90 percent of hunters taking efforts to reduce the amount of lead available to condors. The department has provided free non-lead ammunition to hunters drawn in affected game management units and also to Navajo animal control officers and the Coconino County Sheriff's Department.

"Arizona Game and Fish has been encouraged by the support it has received from hunters to use non-lead ammunition in condor range, but we're asking for anyone who uses a firearm to harvest or dispatch wildlife or domestic animals to use non-lead ammunition or remove the carcasses from the field in condor range," said Kathy Sullivan, the Game and Fish condor program coordinator..

The Utah Division of Wildlife Resources began a non-lead program for hunters last year to benefit condors that have expanded their foraging range to Zion National Park and surrounding areas.

When hunters learn that lead ammunition harms wildlife, they often are willing to use non-lead bullets or haul the remains out of the field.

"I am a hunter and until a few years ago I had no idea that lead-based ammunition was harmful," Parish said. "Now, like many hunters who are aware of the problem, I use non-lead ammo and find that it offers fantastic performance."

There are now 68 California Condors flying free in the wild in Arizona. Another nine condors are in a holding pen awaiting release within the next few months.