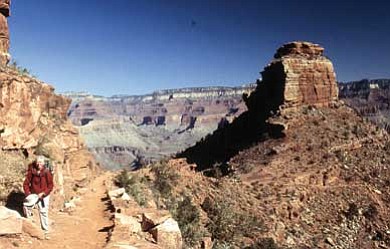 Submitted photo<br> Jonathan Upchurch takes a breather on the South Kaibab Trail in 2008.

On June 27, 1961, I took my first hike at the Grand Canyon. It was a typical 1960's family vacation. My mom, dad and I piled into the family station wagon at our home near Chicago and embarked on a three week trip of the American Southwest.

Grand Canyon country is a lot different from the prairies of Illinois. After a couple of days at the Grand Canyon, the three of us started down the South Kaibab Trail for a Rim to River to Rim hike in one day. As naive flatlanders we didn't quite understand how over-ambitious our plans were to hike to the bottom of the mile deep Canyon.

June 27 was hot. Not a cloud in the sky. We didn't get a very early start. My mother and I shared a one and one-half quart Army canteen - on a waterless trail - that my dad had kept from World War II. This was perhaps the first real hike that I had ever taken.

Today, the Park Service has Preventive Search and Rescue (PSAR) staff patrolling the main trails. The PSARs take a look at hikers coming down the trail. Do they have enough water? Enough food? Good footwear? How far are they planning to hike? Are they ill-prepared for their hike? If there had been a PSAR staff in 1961, they would have looked at us, turned us right around, and sent us back to the Rim.

By late morning we were about two-thirds of the way down into the Canyon, below the redwall limestone. It was very hot, the sun was blazing, my mom and I were tired, and we were already rationing water.

It was time for Plan B. My dad decided he would continue down to Phantom Ranch and refill his two-quart canteen. My mom and I were instructed to walk back to the Rim, get some ice cream, and then go to Yaki Point with binoculars to see how soon my dad would be coming back up the trail.

After dad disappeared toward the Tipoff, my mom decided it was too hot, and there was too little water to hike up through the Redwall switchbacks in the heat of the day. She and I decided to wait under a rock overhang until some shade would develop on the switchbacks in mid-afternoon. Now, 50 years later, I still recognize the place along the trail where we must have waited.

It was a very slow crawl out of the Canyon that day. My dad probably caught up to us before we got to the top of the Redwall. The sun set when we were somewhere around Cedar Ridge. It was 10 p.m., with some moonlight when we finally reached the Rim.

In retrospect, we were very fortunate not to develop a heat-related illness that day. Every year a few hikers die in the Canyon because their bodies can't deal with the heat and they don't have enough water. I hope that just by sharing this story we can avert a hiking tragedy in the Canyon this year.

My Canyon hiking experiences have gotten better over the years. My parents and I returned to the Canyon from Illinois in 1965 and my dad and I did a Rim-to-Rim hike. In the summer of 1967, I attended Northern Arizona University and had a once in a lifetime experience of going on a backpacking trip with Grand Canyon hiking legend Harvey Butchart. Over the following decades I returned to the Canyon from time to time and did more hiking.

Five years ago, my wife Betty and I moved to the South Rim, she to serve as Park Librarian and I to work on the park's transportation plan. That provided the opportunity to do a lot more Canyon hiking. I've now hiked most of the named trails in the park and hiked almost 2,000 miles in the Canyon.

I'll never hike as many miles in the Canyon as Harvey Butchart. He hiked over 12,000 miles below the Rim. And, there are lots of other hikers who have covered far more miles than I have. But, I've still enjoyed lots of time in the Canyon.

What will I be doing on June 27th this year? I certainly won't try to recreate the 1961 hike. Maybe I'll do a shorter, ceremonial hike on the South Kaibab Trail early in the morning, when it's cool.