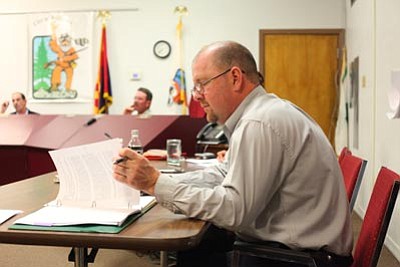 WILLIAMS - Following the departure of former City Manager Dennis Wells in November of 2009, the city of Williams has operated without filling the vacant position.

Williams Finance Director Joe Duffy has served as Interim City Manager since that time. But, at the May 27 regular meeting of the Williams City Council, Williams Mayor John Moore said Duffy would like the city to actively begin looking to fill the position on a permanent basis.

"As some of you may know or not know, Joe's intent is to get back to his regular duties as finance director, I guess as quickly as he can," Moore said. "We discussed it the other day and he knows it is going to take some time."

Salary, position description and minimum qualifications will need to be determined.

Councilman James Wurgler asked whether boilerplate language might be available and whether finding a candidate was a human resources issue.

Susan Kerley, human resources manager, said there is currently a process in place.

"There is a request for personnel and within that is defined what we're looking for," Kerley said. "And then it would be my responsibility to develop a timeline and complete the project through recruitment."

Duffy said city staff would like direction from council regarding what to look for in a candidate before drafting sample advertisements and recruitment brochures.

"The reality is you're going to advertise for a minimum of 30 days, we'll receive applications and it will take around 15 days to review them," he said.

Duffy added advertisements would be posted on the Arizona League of Cities and Towns Website among other options.

Moore said he doesn't look forward to proceeding with the usual search process.

"I certainly don't want to get into the age old process of calling up the Arizona League of Cities and Towns and say 'hey, we're looking for a city manager.' And, they'll send us their top five candidates that are out of work right now," Moore said.

As for why council waited close to two years to begin the preliminary process of finding a new city manager, following the council meeting Moore said council members hoped to consider other options.

"The thought process was it was kind of a wait and see situation to see what we might do. There has been different discussions about doing different things," he said. "(Duffy) has done an OK job of managing it. Problem is, it's overloading him."

Moore went on to say one option some council members considered was whether a city manager is even necessary. The problem is, city code requires a city manager.

"It would be a deviation if we tried to get away from that," Moore said. "We'd have to change a lot of codes and ordinances. In reality, if we don't get someone, it's just going to fall back on current staff. In the short run it's been fine but in the long run it's too much."