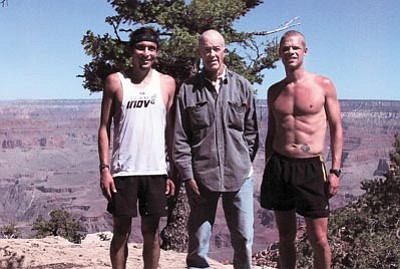 GRAND CANYON, Ariz. - Anyone for breaking a 30-year-old record today? In 1981, 44-year-old Allyn Cureton ran from the North Rim to the South Rim of the Grand Canyon in a record setting time of three hours, six minutes and 46 seconds.

Breaking the stubborn Rim-to-Rim record is another notch carved in Jared Scott's running career, which has spanned over half of the 28-year-old's life.

"Everyone knows that I run, so I just go and run. We also have a wellness plan where we can take time out of our work schedule to go work out, to keep us healthy," he said.

A new member to the Grand Canyon community, Scott automatically incorporated running down into the Canyon as part of his weekly training, but it was a fellow running friend, Jason Wolfe who suggested attempting the Rim-to-Rim record to Scott.

"It is something that I guess I never really had the urge to do until my friend asked me," Scott said.

Along with excellent physical endurance and years of experience, running a distance like the Rim-to-Rim requires planning. After two months of preparation, Wolfe and Scott camped the night at the windy North Rim, rising early the next day in pursuit of the record.

Even though summer temperatures are still struggling to rise at the Rim, Scott said heat played a huge factor in the run. Down inside the Canyon, temperatures are quite deceptive. A relatively mild 70 degrees up on the Rim could mean temperatures in the nineties at Phantom Ranch.

"The heat was actually getting to me," Scott said. "I guess I looked pretty bad because people were asking me if I needed water. Usually that only happens when you look pretty bad," he laughed, adding his wife said he looked so exhausted she didn't want to take pictures of him.

Struggling against the heat, Scott said walking made him feel dizzy so he had to keep his pace up in order to keep from falling.

"I drank a full gallon of water throughout this whole thing and I probably could have used a lot more water than that," Scott said, adding how important it is people know how prepared they need to be if they plan to hike or even walk out of the Grand Canyon on a hot day.

Now 74-years-old, Cureton still remembers how dangerous the heat can be. He recalled running down to Indian Springs once, coming back up to eat and collapsing suddenly at Maswick Cafeteria.

"I remember that was an embarrassing thing," he laughed.

After the run, Scott had arranged to be met at the Rim by Cureton. Scott and Wolfe finished, recovered and introduced themselves - a unique ending to a demanding challenge.

"It was cool to meet him, I thought it was great that he came up. Because people have been chasing this guy's record for years. Thirty years is a long time to hold a record he said, adding he thought it would be a nice gesture to let him know his records are still being chased.

Cureton said he felt good about the record being broken, humbly wishing Scott had beat his time by more than 30 seconds.

"I had always assumed my time wasn't that great, and I wondered why it hadn't been broken earlier," he smiled modestly, adding when he ran, he never expected to create records.

Maybe seeing Wolfe and Scott run gave Cureton the motivation to hit the trails again, or maybe he's content with just watching. Either way, Scott was happy to meet the man whose record he beat.

"One of the last things he said was 'it might take a while to get back into shape, but maybe I'll run this again,'" he laughed.