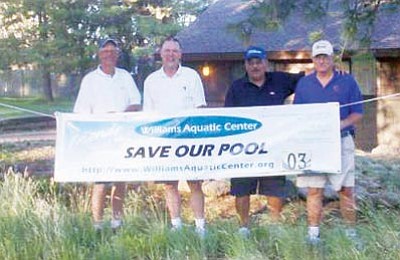 Photo/Bobby Patricca<br> Some of the winners from the Second Annual Friends of the Williams Aquatic Center Golf Tournament pose for a picture after the event. From left to right are Bob DeLander (Third Net), Ken Edes (First Net) and Mark Temke, and Robert Martinez (First Gross).

WILLIAMS - The Friends of the Williams Aquatic Center held their second annual golf tournament this past Saturday at the Elephant Rocks Golf Course, and despite the weather not being optimal for low golf scores, the event was a tremendous success. Golfers got started just before 12:30 p.m. as the winds picked up, with gusts exceeding 25 mph at times.

Despite the winds, golfers had a very enjoyable afternoon on the greens and were treated to a delicious deep-pit barbecue dinner inside the Elephant Rocks Banquet Hall. Deep pit barbecue beef brisket, pork, homemade cole slaw, homemade beans and homemade desserts were enjoyed by all.

Winds made play more challenging, but the golfers responded with their best and put up some very good scores. Claiming First Place Gross (raw score without handicap) were Mark Temke and Robert Martinez with a score of 68, four strokes under par. Winning First Place Net (with handicap) with a score of 61 were Ken Edes and Kim Brown. Second Place Net went to Fred Wasserman and Don Brown, actually tying Third Place Net Brian James and Bob De Lander with a score of 62.5. Closest to the Pin challenges were held on each of Elephant Rocks' Par 3 holes, with Larry Olson claiming the prize on hole 3, Marci Freshour on the 12th hole, David Holmes on the 14th hole, and Steve Johnson winning on the scenic 18th and final hole.

The Friends of the Aquatic Center was very pleased with the turnout for the event, which raised in excess of $3,000 for the group. The Friends have spent the past year in search of ways to reopen the Williams Aquatic Center on a year-round basis.

The city of Williams closed the pool in January 2010 due to budget cuts, but was able to reopen the center for the summer of 2010 for six weeks and has reopened the pool for 11 weeks this summer. The Friends of the Aquatic Center is looking into extending the pool season past the current closing date of Aug. 13 using funds from fundraisers like the golf tournament held on Saturday. The Friends will be holding various fundraisers in the future to find ways of solving the climate control issues that are present at the aquatic center that is currently the biggest obstacle to reopening the pool year-round.