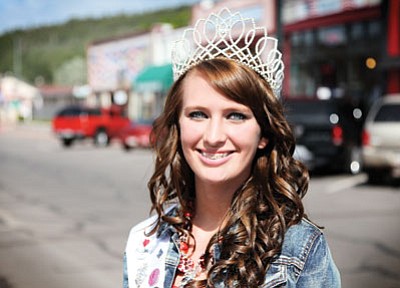 April Zicopoulos, current Miss Route 66 Williams, said she will miss representing the city of Williams once she relinquishes the crown.

"It's been amazing, I'm kind of sad it's going to be over," Zicopoulos said. "I'm really busy and have a lot on my plate, but it's still been a great experience."

Lily Macks and Kelly Stewart are vying for the Miss Route 66 Williams title, and will experience a new pageant format, different from year's past.

"Rather than doing the full blown pageant like we have done before, the girls are going to go before a private judges panel and they are going to be interviewed," Pageant Coordinator Pimi Bennett said.

After the judges have deliberated and come to their final decision, Bennett said there will be an official crowning ceremony, open to the public, where April Zicopoulos will place the crown on the new Miss. Route 66 Williams. Then, the winner will showcase her talent and do her final walk for the public.

The judges will make a decision based on their formal introduction, formal wear, and a Route 66 history question. Knowledge of the history of Route 66 is required, demonstrated in an essay on the Mother Road as well as what wearing the crown would mean to the contestant.

Judges will score each category on a scale from 1-10 in each category with the overall high scorer earning the crown and title. The pageant's judges will be from Route 66 communities outside of Williams and immediate surrounding areas.

Bennett is in her third year chairing the pageant and said many in the community have stepped up with donations and sponsorships to help make the pageant a success. However, there is still time to contribute.

"The pageant is still seeking sponsors, anything helps," she said.

Miss Route 66 Williams contestants must be between the ages of 14-19, be unmarried with no children, live in the 86046 zip code, and currently be attending high school, college or a trade school.

The crowning ceremony will be Aug 12. Time and place is yet to be announced.