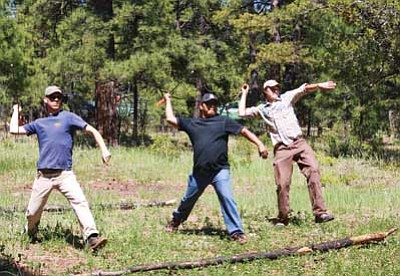 FREDONIA, Ariz. - The Kaibab National Forest is working to make good on a promise to provide environmental education opportunities to tribal youth throughout northern Arizona.

Over the past year, forest employees have participated in multiple events with five Native American tribes.

According to Kaibab National Forest Tribal Liaison Mike Lyndon, the forest has signed agreements to provide such opportunities at the tribes' request, but it's also something employees are passionate about.

"In my opinion, what makes us successful as a forest is that there is a wide network of dedicated individuals on the Kaibab that have an interest in working with tribes," Lyndon said.

In 1997, the Kaibab was the first national forest in the Southwest to designate a tribal liaison. In 1999, the forest signed its first Memorandum of Understanding with an area tribe to address consultation issues and to build a strong, mutually-beneficial relationship. These efforts gained national recognition from then-Vice President Al Gore, who designated the Kaibab a National Reinvention Laboratory for its work to foster improved relationships with tribal neighbors.

Since then, the Kaibab has signed a Memorandum of Understanding with the Havasupai Tribe, the Hopi Tribe, the Hualapai Tribe, and the Kaibab Band of Paiutes. Another part of building good relationships involves providing environmental education opportunities to youth, an activity for which the forest is well-suited.

"The outdoor environment is the ideal classroom," said North Kaibab Assistant Archaeologist Britt Betenson. "Perhaps through on-forest environmental education we can help tribal children establish their own relationship with the land, which may help the tribe maintain a connection with the forest."

In June, forest employees hiked in eight miles to Supai Village to camp out for several nights and teach conservation classes to 15 children attending summer school there. They provided lectures and hands-on activities dealing with archaeology, biology, geology, silviculture, and fire prevention, among other things.

"All of those classes served a purpose," said Colleen Kaska, a former Havasupai Council member now in charge of tribal security. "If these classes keep happening on a regular basis, the young ones could pick up a lot of skills."

During the same month, the Kaibab also hosted the Diné College Native American Environmental Youth Camp at Grandview on the Tusayan Ranger District. Nineteen youth from the Navajo Indian Reservation camped out for two nights and learned about a variety of natural resource issues, which included a helicopter tour to look at erosion.

"They were very interested in the water component, and even did some water testing," said Kaibab Navajo Liaison Mae Franklin.

In May, employees held a camp at Jacob Lake on the Kaibab Plateau with 20 children affiliated with the Kaibab Band of Paiutes. During the past year, employees also participated in Hopi Earth Day events and the Hopi Tribe Kykotsmovi Youth Program, and in 2010 forest employees took part in a Hualapai language immersion camp.

The USDA Forest Service's More Kids in the Woods program has a similar goal of reaching out to kids nationwide to instill an appreciation for the outdoors and natural resource conservation in future generations.

The Kaibab National Forest hopes to continue fostering strong relationships with neighboring tribes and to continue participating in youth camps and events.