Pool to remain open through Sept. 10
Friends of the Aquatic Center donate $5,500 to city of Williams 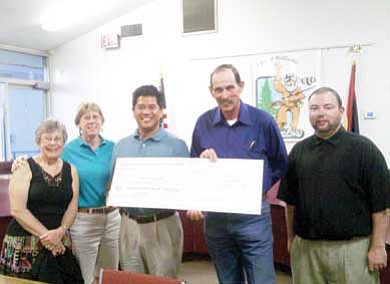 Submitted photo<br> Board members of the Friends of the Williams Aquatic Center present a check for $5,500 to the city of Williams during the July 14 Williams City Council meeting. Pictured from left to right are: Kris Vasquez, Clare Hydock, Mike Dulay, Mayor John Moore, and Bobby Patricca.

WILLIAMS - Thanks to a generous donation by the Friends of the Williams Aquatic Center (FWAC), the Williams Aquatic Center will now remain open through Sept. 10, instead of closing on Aug. 13 as originally scheduled. The FWAC presented a check for $5,500 to the city of Williams at the regular July 14 Williams City Council meeting at City Hall. The donation was given using funds from several fundraisers the group has held, in addition to a $500 grant received from the Greater Williams Community Fund (GWCF) last month.

The FWAC non-profit group was formed in early 2010, shortly after the sudden closing of the Williams Aquatic Center in January 2010 by the city of Williams due to budget issues. Since then, they have held annual events such as the "Great Dam Bridge Ducky Egg Race" and two golf tournaments at the Elephant Rocks Golf Course as well as other smaller fundraisers around the community. The group received its first grant award last month when the GWCF awarded them a $500 grant, along with the prestigious Kevin Twitty Award for their efforts in the community. In total, the group has received nearly $10,000 in donations and grants since it was founded, and the extension of the swimming season is their first major target of the funds they have received.

Extending the pool season into September was an important goal to both FWAC Board Chairman Mike Dulay, as well as Recreation Director Rose Newbold.

"I don't have to close the pool in the middle of the summer now" said Newbold.

Although the kids go back to school on Aug. 15, temperatures are usually still quite warm well into September and people still want to swim when it's that warm, according to Newbold. The city could only budget enough money to keep the pool open until kids went back to school, but thanks to the donation from the FWAC, other members of the community who enjoy aerobics, lap swim, and swimming for health reasons will be able to continue using the pool past Labor Day, which was important to Dulay and the other board members of the FWAC.

The extension of the swimming season for 2011 is a realization of one of the FWAC's short-term goals, but the group will now turn its focus to long-term goals for the future. Due to the construction of the building, which uses brick and mortar for the offices and locker rooms, while using a metal structure to enclose the pool itself, climate control issues are the number one issue for the long-term use of the pool and returning it to year-round operation. When constructed, the building used a system called the PoolPak, which

is the large unit on the north side of the building. In recent years, the PoolPak has had numerous issues and is no longer operational, which is a major obstacle to returning to year-round operation. Given the extremes in weather that Williams experiences, such as this past winter when temperatures reached more than minus-20 on multiple occasions, as well as summertime temperatures which can exceed 90 degrees, finding a way to control the climate inside the building for those extremes has not been an easy task. Replacing the control board for the PoolPak would cost more than $15,000, according to estimates from PoolPak experts who have inspected the unit and the building in recent months.

Currently, Williams Aquatic Center employees are using the large bay doors around the pool to attempt to control the temperature and humidity inside the building, and are doing a wonderful job despite all the difficulties, according to Newbold. Due to the high humidity levels, employees at the pool spend several hours each week working to prevent rust issues with many of the metal items in the pool area, and are doing a very good job of doing so. Despite their efforts, a long-term solution needs to be found to control the climate of the building before year-round operation could resume, which is the next major goal of the FWAC.

"Getting the PoolPak operational is looking like our best option right now," said Dulay.

The group has talked to staff from various pools around the country, and with the research done so far, repairing the PoolPak appears to be the most economical way to operate the building.

"It does everything that the building needs. Heating, cooling, circulating the air, and reducing the humidity, this is the one unit that can do all of those things" said Dulay. Along with the climate control issue, the FWAC is also looking into grants for electricity, chemicals, and gas, which would help reduce operating costs for the city and be a big step towards returning the pool to year-round operation.

In addition to the $5,500 presented to the city at the July 14 council meeting, the group also presented a check for $300 to the city to sponsor a Free Swim day on Aug. 13, the original closure date of the pool, to officially "kick off" the extension of the season sponsored by the FWAC. The American Legion Ladies Auxiliary, Unit 13, will also be holding a fundraising barbecue and raffle at the Williams Recreation Center, benefiting the Friends of the Williams Aquatic Center, that same day from 11 a.m. to 3 p.m. The barbecue will include your choice of barbecue pork or beef, cole slaw, rolls, and a drink. The cost will be $7 for ages 12 and up and $4 for children. There will also be a toy walk and Veterans of Foreign Wars information booth set up at the barbecue.

To donate raffle prizes or toy walk items, or for more information, please contact Clare Hydock at (928) 814-6754 or email friends@williamsaquaticcenter.org.